This is what had me perplexed; I couldn't figure out how to use the [ ].  Basically, @Mr-Dang-MSFT , your patch almost mirrors the JSON.  Clever. 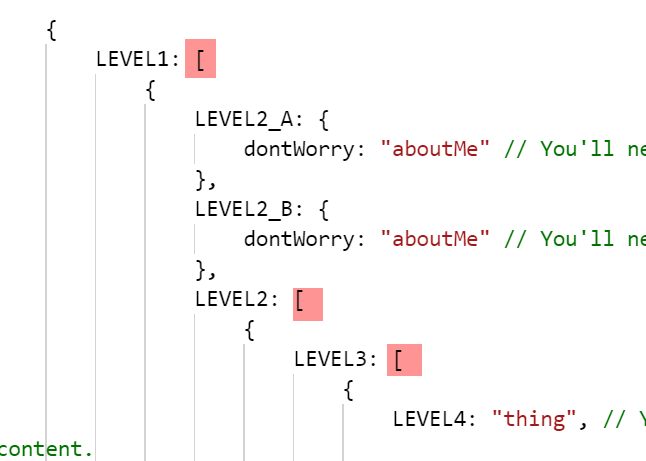 Man! Woman and Child! this project just increased in difficulty!

Thank you @Mr-Dang-MSFT for the sample app, it is very helpful.

The big revelations are:

It must not be very common to manipulate JSON 3-4 levels deep with PowerApps.

* I'm now wondering if I should to get the API provider to flatten the JSON before collecting.

Man! Thanks again everyone. Please keep the ideas coming!

(As an aside, the additional comma in original post was from redacting).

@KickingApps , another interesting piece about the [ ] is that they appear to require a ".Value" when the JSON is collected raw.

Since we're collecting the JSON from a GET request, the ".Value" 's don't appear when "digging" into the hierarchy.

If the API is only consumed in PowerApps and Flow, by all means keep its schema simple. It is a luxury to have control over your output.

If its schema is important for showing hierarchy of data and it's used elsewhere, then keep the complexity. In PowerApps and Flow, pancake it to the parts you need. Then do some concatenation to open it it up again when you need to POST.

To do 50 at a time, you'll wrap ForAll around Patch. There's a few threads on this forum on that pattern.

As I'm coming into this late, there's not that much of value that I can really add.

But well done everyone for all the great suggestions - @Mr-Dang-MSFT @RandyHayes  @KickingApps @wyotim @Eloy . It's wonderful to see such cohesive community effort.

And thanks @ericonline for coming up with some of the most complicated questions on this forum!

Well said @timl! And very true that @ericonline brings up some of the most interesting questions. As someone who usually deals with considerably simpler issues, I really appreciate being able to get exposure to more complex data scenarios!

Thank you everyone for the insights, ideas and great examples.
Breakdown (the logical one, not the mental one 🙂 😞

I wrote up some lessons learned here. The big revelation was that the SAME schema that shows "Success" in the Custom Connector Test area did NOT work for the Custom Connector POST function, Table() was required in lieu of the [ ] 's .
I repeat: Square brackets WOULD NOT WORK in the function!

OnChange of the toggles:

Appstronaut badge worthy is you ask me! Excellent work and thanks for sharing your knowledge as you traveled this path; I learned so much.
Message 18 of 24
1,091 Views
2 Kudos
Reply
Highlighted

Awesome! Thanks for sharing the solution and lessons learned. I agree with @KickingApps: Appstronaut level! You need to add Deeply-Nested JSON Whisperer to your list of skills (and consider changing your forum pic to Robert Redford).