Help with: ForAll items in a collection Patch in SQL table If record doesn’t exist, else UPDATE

Hello. I tried the suggested articled in this post to solve my problem with no luck. So if someone here can give me a hand it will be greatly appreciated.

I have a gallery that lists basic information of a long list of clinical research papers. The idea is to allow the user to look at what is available and mark for future review those that catch their attention. This is achieved by clicking on a star icon that OnSelect takes the information of that paper and adds it to a collection called FavCol.  The collection has several columns two of which are “record”(the unique identifier) and “favorite” that will toggle between  “Yes”or “No” each time the user clicks the star icon.

Once the user has reviewed the gallery they press a button that will patch the collection into an SQL database (dbo.Table_DQ) only if those records don’t already exist, if they do exist, only the “record” column will be updated.

I have used several variations of this code with no success. Any help will be appreciated. Best regards.

Anonymous
Not applicable
In response to Gustavo_C

I think your formula structure still needs some work, try this:

The problem seems to lie in the last Patch

The other thing I noticed is that your formula structure seems off? In the pic below your ForAll() ends at 1 and your If() at 2, this doesn't seem to be correct - or maybe it is?

Thanks @WarrenBelz  and @Anonymous for your help so far. I made the corrections suggested by Eelman and the errors I had in the formula went away, so no red lines. The issue is that it doesn't patch or update records.

Now, I am just learning here so forgive me if I say an atrocity. This is the way I understand the code.

Patch('[dbo].[Tbl_DQ]', {favorite:favorite}))))// This would be the ELSE part of the IF which is the action that would be applied to any record that already exists in the source.

@WarrenBelz  What do you mean when you say that the record needs to be identified?

Hi @Gustavo_C ,
Try this - I could not test so make sure all brackets and commas are there.

Anonymous
Not applicable
In response to Gustavo_C

@Gustavo_C it's good to see you've got rid of those pesky red lines! Nothing worse, haha

First suggestion I'd make is that you may be getting an error from 'record = record'. The way I usually deal with these is to use RenameColumns, like this:

Next, I think (not sure) that:

creates a 'Value' you can reference further in your code, so that your IsBlank becomes:

And as @WarrenBelz suggested, you need to reference a record for the last part of your Patch and you may be able to use 'Value' here, like this:

Putting all the above together gives you this (note: I haven't tested this so you may need to tinker a bit?):

If this doesn't work and 'Value' isn't available to select, you could just remove the LookUp() at the start and replace the 2 places where 'Value' appears in my solution with the removed LookUp() formula ... maybe 🙂

Like I said, I've not tested this but let me know how you go.

I have used favorite functionality in the past. Is there a reason why you are not Patching on the Star button itself?

Why not put the Patch action on the selector so that OnSelect, you can patch the value to the favorite column?

This way you can avoid the ForAll() and changes are made instantly as opposed to needing to process.

There are many solutions to any problem - @Anonymous and myself try to stay within the structure of the code given and make it valid - it makes a smaller journey for the user to take an in particular understand for future usage.

@Gustavo_C , @Anonymous and myself can both solve this for you - please tag which whichever path is best for you to follow.

Hello Warren, last night I tried to make this work following your suggestions and @Anonymous. This is how it looks like with the code you suggested: 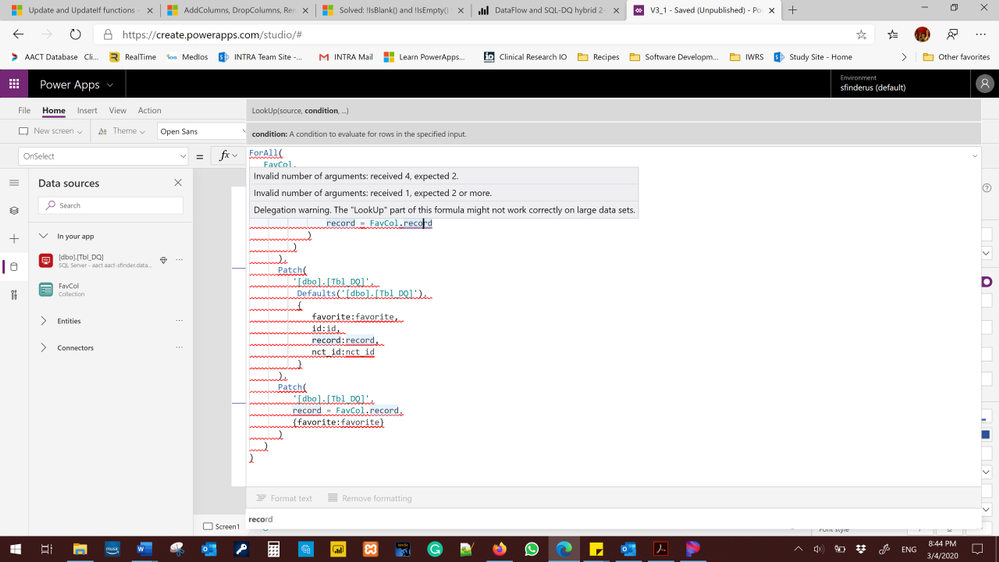 I reviewed the parenthesis and comas and they seem to be fine. I made several changes back and forth and couldn't make it work.

Any other suggestion, no matter how different from my rookie code, will be appreciated.

Hello Eelman. Thanks for your suggestion, same as with Warren's I tried to make it work, using Value or the LookUp statement, to no avail. Here is how it looked like when I used the Value. 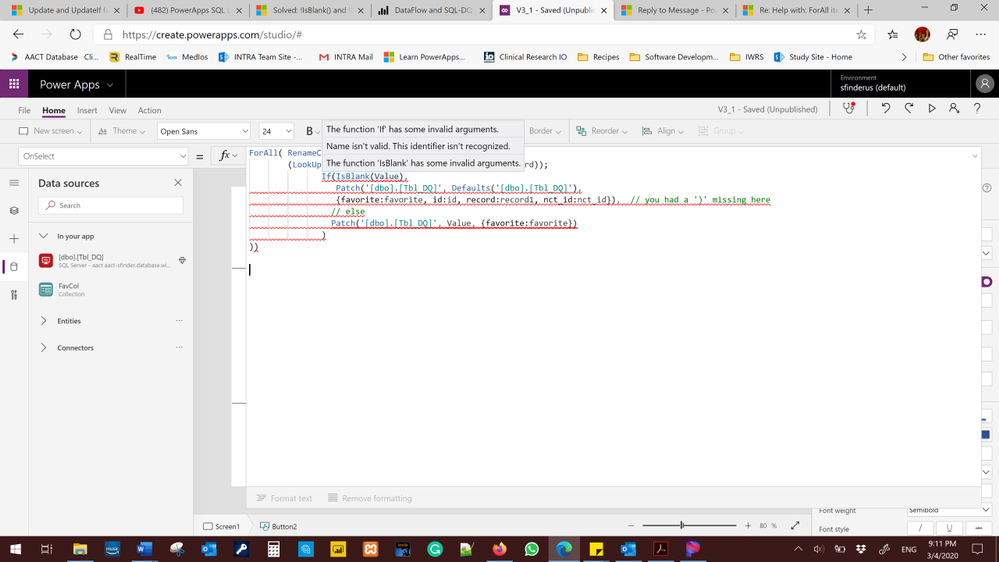 I checked for parenthesis and other obvious errors but couldn't identify anything. Grrrr.

Any suggestions please let me know. Thanks for your help so far with this.