How to populate Dropdown List in form when editing a record

In the app I'm working on users, when users are filling out a form they are able to save it as a draft instead of submitting for approval.

On saving a form as a draft the form is saved in the same list (Biosecurity Checklist) as a submitted form, however its application status is set to 'Draft' in the list.

The user should then be able to then edit this draft by accessing it through the 'Menu' page in the app: 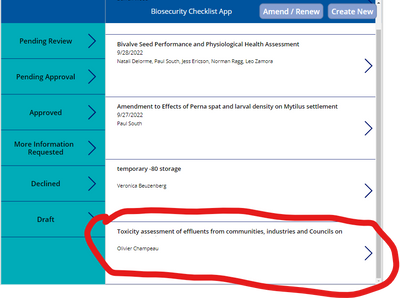 When the user clicks on the item circled in red they should be seeing the form with their previously entered data, for example: 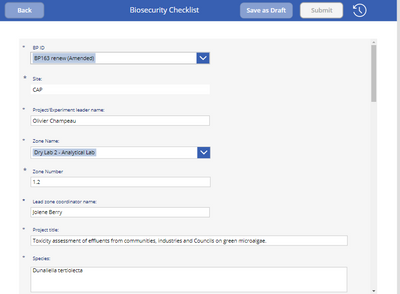 However, when the user clicks on the on the item, none of the previously data is being displayed: 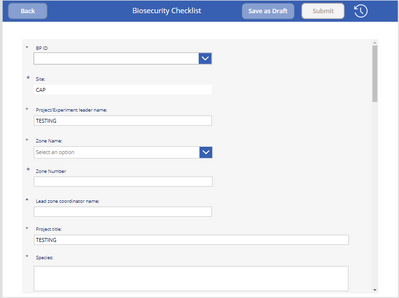 For context, the BPID field is connected to the Site, Project/Experiment leader name, Project Title, and Species fields. When a BPID is chosen from the combobox is populates these fields with the data connected to the BPID.

The same is true for the Zone Name field, it is connected to the Zone Number and Lead zone coordinator fields and will populate these fields based on the chosen Zone Name.

How do I go about making this work correctly?

Set the DefaultSelectedItems of the controls to Parent.Default. Most probably the controls are combobox type.

Set the DefaultSelectedItems of the controls to Parent.Default. Most probably the controls are combobox type.

Helper I
In response to gabibalaban

Hi @gabibalaban , as the combo boxes are using data from a separate list I am not able to have the Items set to Parent