I have the following code to create an "Info" collection with a column called "AttributesNew" : 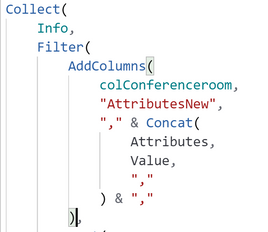 The issue I'm having is under my "AttributesNew" column, the text it results in has a "," in the beginning and end of the string of text. Here's an example of an output it'd give:

I'd like to remove the first both the first and last comma of that string of text so that the output is this:

How would I modify my existing code to account for this functionality? I've messed around with using the Left() and Len() function but no luck as of yet.

Your code looks like it is adding those commas for you - see circled expressions. Remove those and those extra commas should disappear: 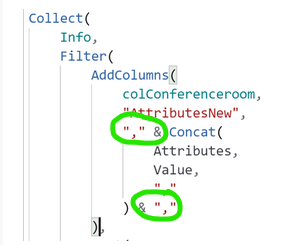 Your code looks like it is adding those commas for you - see circled expressions. Remove those and those extra commas should disappear:

Helper V
In response to BCLS776

Sometimes I look at code so long that I don't see the extreme obvious lol. Thank you for your help!