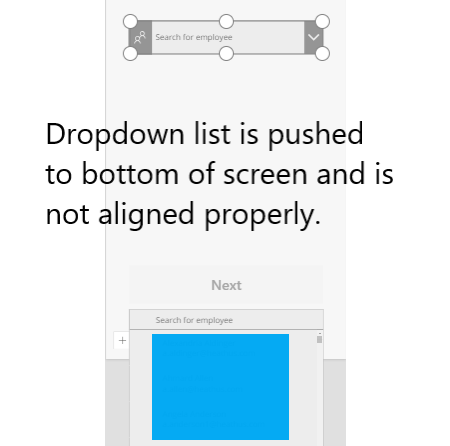 Unable to select an employee

@hjaf, we have experienced the same. In fact, just last week I went through and took most of our apps off of the improved rendering due to this and other performance issues. It seemed to clear up the crashes and boosted the overall performance.

@_Corey_, thank you for the reply and acknowledgement of the issue! Your communication is very appreciated.

@_Corey_ Thanks for the response!

Only iPhones?  We are experiencing this on iPad and iPad pro. I guess this makes no difference, just want to mention it if it does 🙂

@hjaf The issue is not limited to iPhones.  Mobile devices in general are adversely affected because they have limited memory.  We are investigating.

Is there any update on this issue?

@hjaf A number of memory fixes have been released over the last couple of weeks.  Even so, we are continuing to drive down memory leaks and we expect more fixes in the coming weeks.

@_Corey_ Thanks for the update!

I have a number of Canvas Apps that use a SharePoint List as the data source and Choice fields don't load the dropdown when using 'Improved App Rendering' it seems to be hit and miss as it impacts some Apps and not others.

@hjaf @wyotim A quick update: another batch of memory improvement has landed with Studio version 3.19094.  Please update your apps to take advantage of these, especially if your app is Gallery heavy.

@Tacsi We have recently committed a fix for a timing issue where ComboBox controls that are searchable can be unhooked from their data when the dependent data source is refreshed (or removed and added again).

I'll re-post a mitigation that is currently recommended from this post: https://powerusers.microsoft.com/t5/Building-PowerApps-Formerly/Sudden-appearance-of-red-x-s/m-p/371...

As we understand it, the issue may occur sometimes when the data source that a ComboBox control is bound to is either (a) refreshed, or (b) removed and then added again.  The current advised mitigation that has seen success with customers is to perform the following actions after refreshing or removing/adding a data source:

This should allow the ComboBox controls to be correctly reconfigured to the correct values.

Also, if your ComboBox control contains only a small number of values, it is advised to disable IsSearchable since (a) this incurs a slight overhead when enabled, and (b) the issue of empty values only occurs when IsSearchable=true.

FYI--the fix is expected to be deployed to all production regions the week of October 21.

@_Corey_, as always, thank you for the updates and info! They are greatly appreciated!

I have noticed a strange delay with data updates while using SQL views in my apps.

The issue is when data has been patched to our SQL database, the changes do not show in the apps immedately, sometimes I have to refresh the data sources 3-4 times for the changes to show.