i'm not able to view in Microsoft Teams the Tab with PowerApps, is anyone having the same issue?

thank you so much

Just verifying... Have you scrolled down in the Add a Tab dialog? I didn't see PowerApps until I scrolled... 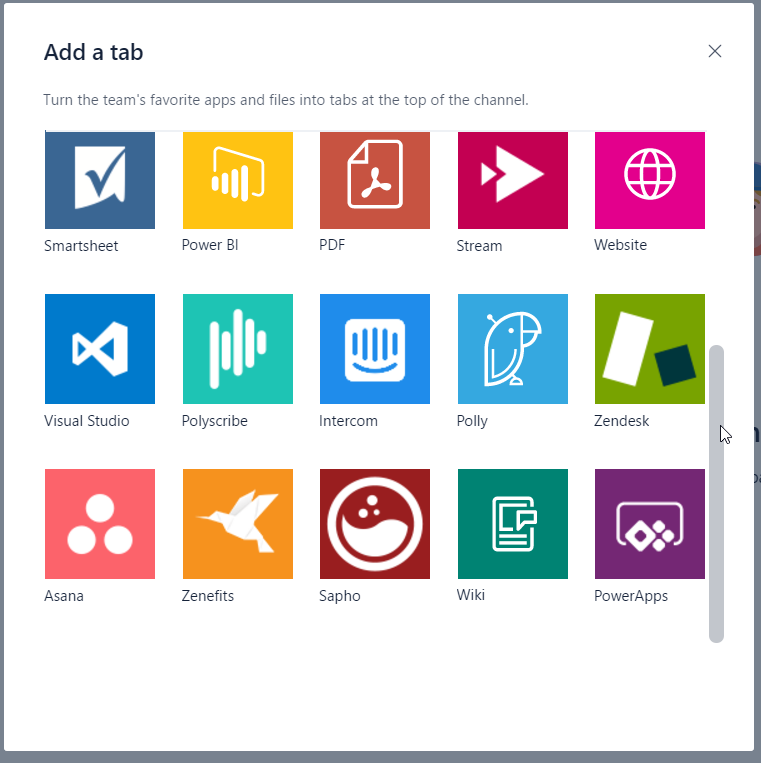 Also, if you're using the Teams desktop client, you'd want to make sure it's been updated: https://sandyu.com/2017/04/06/teams-get-version-updates-for-the-client-app/

thank you so much!

Unfortunately i cannot see, does this depends on the licensing?

Hmm, I'm afraid I don't know the answer to that, sorry. I have an E3 tenant with Early Release turned on, but in the MS blog post about this feature, they don't mention any particular license requirement: https://powerapps.microsoft.com/en-us/blog/powerapps-teams/

I see that a couple people commented on that blog post that they couldn't see PowerApps when adding a tab in Teams, but that was a few weeks ago, and I don't see whether they got a final resolution to that... Maybe you could add a comment there as well?

sarafankit
Power Apps
If you cannot see the other tabs as well, please ask your Office 365 admin to enable tabs functionality for Teams using the Office 365 admin center.
Message 5 of 7
771 Views
0 Kudos
Reply

In the web version I get everythnig. I've installed a powerapp tab on my web version which works fine, but the tab does not display in the desktop version.

Edit: It has corrected itself now. Did a full log out / shut down of teams after checking for update. It appeared after logging back in.

@hartzki- Glad to know the issue is resolved. I will let our partners in Microsoft Teams team know that such issues are happening.