Is it possible to display data cards' borders or otherwise configure how data cards are visually presented the form's default mode is FormMode.View?

We have noticed that when the form's default mode is FormMode.View, then the data cards lose their borders (screenshots below).

Is there a way to keep the borders when we have FormMode.View?  Perhaps someone would have other tips on how to make the form look "better" when its default mode is set to FormMode.View? Would appreciate any advice!

You could put a rectangle inside the card, set the Height and Width to

DataCard2.Width and DataCard2.Height, the border thickness to 1 and the fill to transparent. It will frame that card regardless of the form mode but make sure to send it to the back or it will block entries when the form is in New or Edit modes.
Message 2 of 10
364 Views
1 Kudo
Reply

hi @Anonymous you can change the border by removing the card's default RGBA(0, 18, 107, 1) and change it to the color you want no matter the mode of the form.

below one form's border is the default blue and another green, edit mode

I believe that is correct.  It does not appear to be a working option even if you set the card's border thickness.  I also tried with a Display form and it doesn't work there either.

thanks! What setting did you change? for me the default border color is set to = 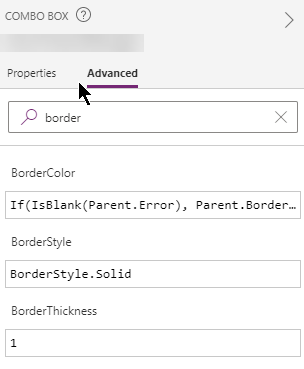 @Drrickryp , could you please advice which property should be changed to show the border of the control inside the card?

I was assuming that you wanted to show the border of the card containing the control.  The two screenshots show the same form.  In the form, I added a rectangle to the card as I described.  I colored the rectangle green and filled the first 3 cards with it.  In the Company name field I used @rubin_boer 's method to add a red colored border to the card. In view mode, it doesn't do anything.  The second screenshot shows the same form in edit mode.  In this mode, the company name is outlined in red. 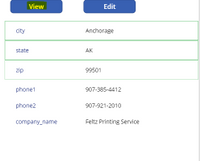 I just discovered something interesting with a display form.  After unlocking the card, I could add a red border rectangle with a transparent fill inside the card.  I did that with each card. However, if I tried to modify the control inside the card by changing its border size and color, it didn't work.  After unlocking the card,  I hid the control inside the card and inserted a new Label control into the card.  I made it's text property Parent.Default and now I was able to modify the border of the label that I put inside as shown in the top card of the screenshot.  The same method worked for the Edit form.  If you hide the native control and replace it with the same control, set the new control's default to Parent.Default, then you can modify the border properties by changing the thickness and color and it will hold those properties even when the form mode changes to View!  In the screenshot, I used my previous form but put a new control in alongside the old one in the state card.  The new control is on the left side in the state card and the old one is on the right.   I put the form in view mode and voila!  the new control has a border while the old one on the right side of the card doesn't. 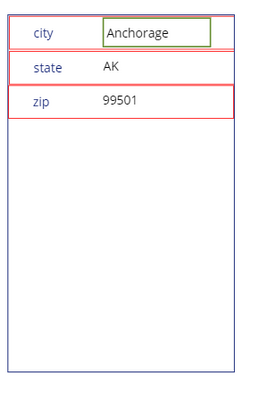