I have run into a problem showing collecting values from other columns from a related Dataverse table.

I have two tables that are related:

Here is an image of the relationships 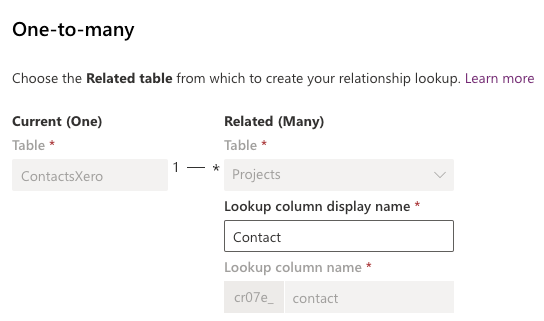 I have a collection called ‘colProjects’ that is modelled off the Projects table.

I have a form that has a Combobox control and sources it’s values from the ‘ContactsXero’ table.

Where I am having issues is updating the colProjects collection with the ContactID from ContactsXero. This should be simple enough.

Here is a sample of my update code:

I can workaround by performing a lookup on the name column, however this would be error prone if there happens to be two contacts with the same name, but more to the point, I shouldn’t have to perform a more complicated lookup.

Am I missing something here?

Any help would be greatly appreciated.

Most likely, this is due to 'Explicit Column Selection'.

I guess the Items property of your cbContact combobox control is set to ‘ContactsXero'.

If you change this to explicitly sepecify cr07e_contactid and the other fields that you want to display with ShowColumns, it should hopefully not return blank when you call cbContact.Selected.cr07e_contactid.

Thanks for your reply @timl

I get some very mixed results when I try your selection. Basically one step forward, and two steps back.

If I use ShowColumns and include the columns of interest in the ComboBox Items field, the part of the code that updates the LookUp field (See below) breaks. Assuming this is because the Contact selected from the Combobox is now a different dimension to what it is expecting.

On no level does this make any sense to me.

When I use your suggested

It shows the correct data - See below.

When I use my original

It also shows the correct data - See below.

So to me it appears that the only thing using ShowColumns is doing, is narrowing the amount of fields used in the ComboBox items.

Another very odd this that I will look into more, it that if I then edit a newly created record, it does successfully update both the Contact Lookup and the ContactID.

Welcome any other suggestions.