Message reads 'Your camera isn't setup or you are already using it.'

I've signed out of Teams. Windows 10 Camera app there appears no way to disconnect connection although I haven't initiated the app. If I run the Camera app the webcam works perfectly.

Clearly I'm missing something.  Not a major issue as app would be used for a mobile audit Power App but not having to switch between desktop and mobile would be good for testing. 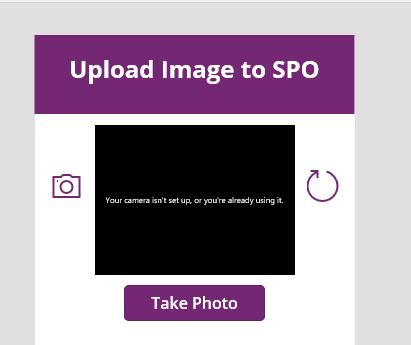 Thank you for taking the time to respond.

Sadly adjusting browser to approve camera didn't overcome the issue. Odd as until recently I had no issue with the camera. Probably an update has changed configuration requirements.

However I found a way around the issue. Use Power App desktop app. Good for testing (for now). Rather iterating to have to switch between desktop development and phone.