Hello all!  I am hoping you can help me solve my problem with my sharepoint integrated form.  I watched @RezaDorrani YouTube video for Multi Select Checkbox in Power Apps and while this video as all Reza videos are awesome this is for a canvas app and trying to get this to work in a sharepoint integrated form.  I have been successful in getting the form to work in new and edit mode but not view mode.  I am using the formula below on my OnVisible which I updated to point to the SharePointIntegration as opposed to the main gallery like Reza showed in his video.

Any ideas where else I would need to update?

This is what I see for the list item:

What I click to view the list item I see this below.  How can I get the check boxes selected to show in view mode?

Then once I go into edit mode I can see the items that were selected and can change and update these with no issue.

I am not sure but like i said it seems to work but edit part has issues. Depends on how you edit it. If you double click on the row and open the form and then Edit All then it seems to refresh ok but if you click on Edit from list toolbar it does not refresh ok and gives you blank values. I Tested refresh and Edit multiple times and saw these inconsistencies. It could be also some code I am missing other then what you posted above. Thanks for helping though..

AMcAdams
Frequent Visitor
In response to sf1173nyc
sf1173nyc  - In your app, is the Checkbox in "refresh(checkbox)" referring to the actual checkbox control? 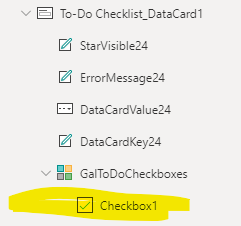 Another thought - in Reza's video it's clear his multi-choice item came from adding a Choice column within the List.  I made all my columns by going to List settings and adding in there. The choice column definitely looks different between those two options.  Which way did you create your choice column? Perhaps the issue is there?

I created a multi-select choice column in the list then when to PowerApps and deconstructed it to add in the galley in its place. 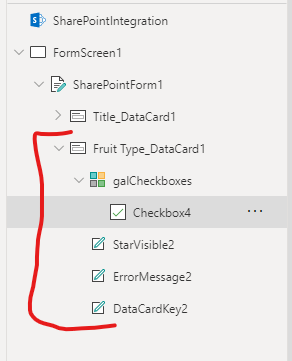 Also this is what I have Checkbox4 programmed like within the datacard.

Thanks sf1173nyc.  I created a new column from the List, instead of in the background, to test with that.

I think the name of your whole List must have been CheckBox - or that came from somewhere else, because the Refresh function wants a data source and the checkbox just wasn't a data source. I switched to the List name and finally got rid of those errors. Though, I still curious if this is accurate.

But now I'm at the place where whatever I choose in one record, it writes that info to all the other records. And while I see that in the form when I open and edit and view, it's not corresponding to the original info I selected in the List.

I've been through everything so many times, nothing makes sense anymore. Ugh!

Yes sorry for the confusion.  Here are the details for naming on the list side.

I am not sure what you are missing.  Here are screen shots of the settings set for each starting with SharePointIntegration (I lined out what I have commented out in the formula to avoid confusion) 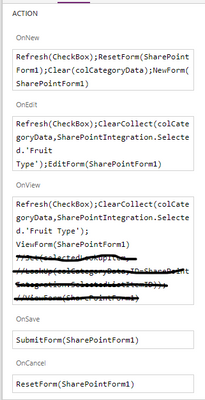 The OnVisble should be blank I comment everything out just in case I ever wanted to see what was there.  You can do either. 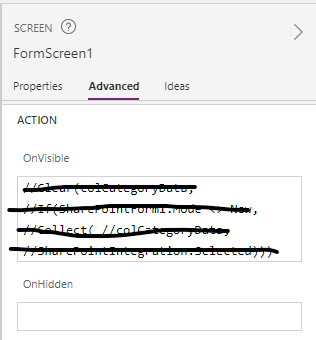 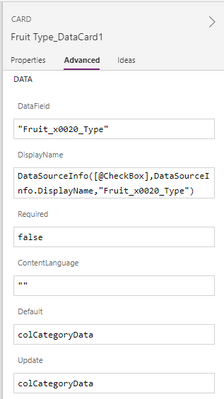 AMcAdams
Frequent Visitor
Thanks sf1173nyc! And sorry for the delay - I had a conference last week and now I'm taking over half the job of a coworker who left. But all I wanted to do was get back to this! 😃
Thanks for all the screenshots. I've compared my details to yours and they were almost identical (except names of things of course). In the Gallery, OnSelect you had nothing there and I had False. I removed that. So now they're identical.  I've refreshed a number of times and even tried signing out and back into 365 - whatever I could do to really make sure the changes had taken effect.
It's just not working.  In the integrated app it doesn't seem to save anything if I leave and come back. And within a session, anything I pick in one record copies to everything else. Weirdly, it is having some interaction with the actual list - when I look at the list many of the items are shown as selected, multiple times even. I don't know how that's even possible.
So - it's a mystery how you seem to be the only person who has figured out how to make this work! 😃 But there are always other ways to collect info, so I'm going back to the drawing board and will figure out something different.
This is such a common thing I really hope Microsoft will someday just build this into apps so it doesn't need all this annoying workaround!
Thanks again for your time sf1173nyc.
Message 16 of 19
179 Views
1 Kudo
Reply

@AMcAdams I concur with your reply. I tried all and it did not work for me as well. I made all changes as suggested but I see all kind of inconsistencies when i go in Edit mode and when once data is saved. Every page refresh seems to not retain data in collection or have it repopulate back into collection from SharePointIntegration object. I am hoping someone can help solve this mystery once and for all.

Much Thanks to @RezaDorrani  and @sf1173nyc  for their support, Finally was able to figure it out working solution for Integrated form. I am posting here what i did so it can help others. 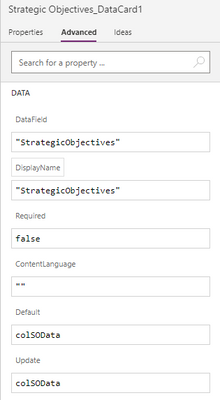 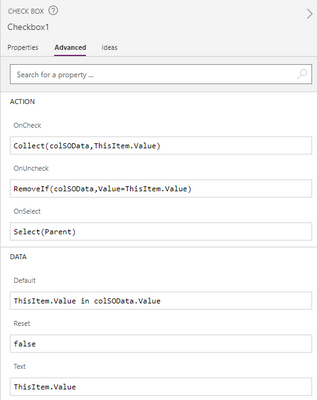 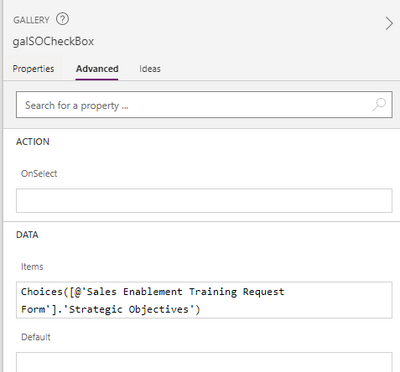 Awesome, glad you were able to figure this out and make it work for you.