When designing a rich-text interface for an app, one problem I had was that I did not know all the tagging nuances of the rich-text box. So I did what I thought was the second best thing.

So in some ways, it sort of worked, but I'm not satisfied with the spacing. Consider the differences side-by-side: 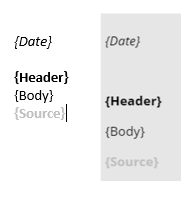 My question is: has anyone strugged with formatting rich-text and what method have you used to ensure a satisfactory formatting? Or is there a resource out there for me to learn html text formatting so that I can micromanage all these settings? Any tip you might have is appreciated. Thanks.