I have 3 SharePoint lists that are related via their IDs, as an example I have created a sample dataset below.

A nested lookup, such as the one below, results in a delegation warning.

Is it viable to breakup the lookup into two parts to avoid the nested lookup? For example, store the inner lookup result as a variable and then use that variable within the outer lookup.

Based on my testing in Power Apps, this appears to work, but I am wondering if I have missed any potential issues/complications that could arise from doing this loophole.

Thank you in advance for your help. 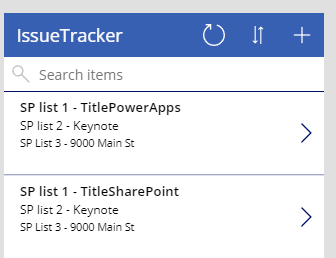 Let me know if any questions

To get Company Info

Helper I
In response to StalinPonnusamy

Thank you for your response @StalinPonnusamy .

Your solution does look more elegant and I will take that onboard to implement.

Out of curiosity, would my method of storing a lookup variable for another lookup have any negative effects?

Nope. This is the right way to implement.

Let me know if any questions

Helper I
In response to StalinPonnusamy

I found that the delegation warning appeared depending on how I set up the with statement:

This Caused Delegation warning (in blue):

This Did not cause delegation warning:

I am not sure if the second set up is still not delegable, but power apps is just not detecting it...

I'm sure you noticed, I'm using 2 with statement to avoid delegation

Yes, I did notice and that appears to work for me - thank you for your help.

I noticed that if I specified the field within the with statement, it also did not cause a delegation warning