I'm a bit of a PowerApps newbie so just getting to grips with things.

I'm looking a making a really simple profit & loss app for a small events company, one revenue field and a few costs fields to be sumed and then subtracted from the 'Revenue' field.

You can use the functions in PowerApps to default values in your app form and then pass those values to columns in Excel. Her's a quick runthrough:

I've recreated an Excel table like you describe and stored on my OneDrive -- I've left the TotalCost and Profit columns blank without formulas:

Then I generated an app from data, and pointed it at the same table.

On the form screen of this app, select the card for the Cost column. Then on the properties tab, switch to Advanced, and unlock the card.

Now you can change the Default property of the card to be a calculated expression, in this case summing the cost (and then later calculating profit), based on the updates a user would make when using the app: 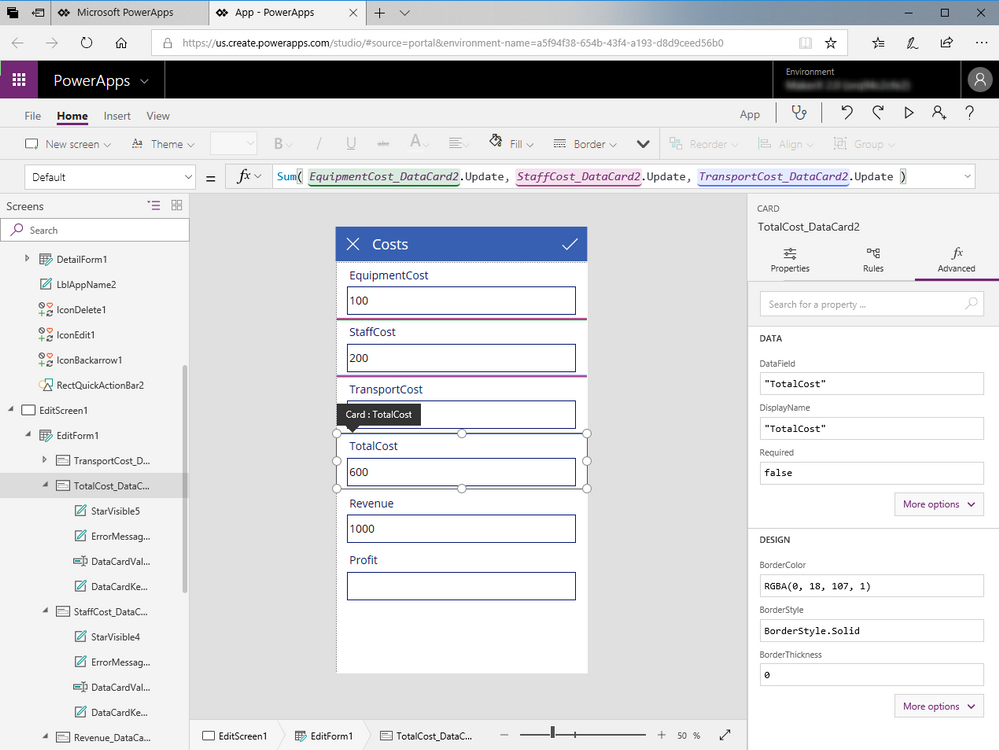 The expression in this case:

When you submit the form, the items will write back to Excel.

The Budget Tracker sample app has some of these patterns in a bit more sophisticated detail that might be useful to check out.

Another option would be to use the Common Data Service instead of Excel, and take advantage of Calculated Fields there, which have the benefit of performing calculations like this server-side for any app using the data (instead of having to repeat the logic if multiple apps touch the same data source).

Do you want to do some calculations on a few fields within your Excel table and then fill in the Total costs field and the Profit field using PowerApps?

I agree with @rc's thought almost. I have made a test on my side, please take a try with the following workaround:

The GIF image as below:

Brilliant thanks for the advice and information, it was really helpful!