I inherited a Powerapp that was functional but not scalable. I am trying to make it scalable and am running into an issue with making a tree hierarchy feature. I am following this tutorial (https://www.youtube.com/watch?v=qJv8IqqL01A) and it has been very useful but I cannot get past the Image - OnSelect part (start at timestamp 8:35).

The function works with the TreeItems collection I have which is set up this way: 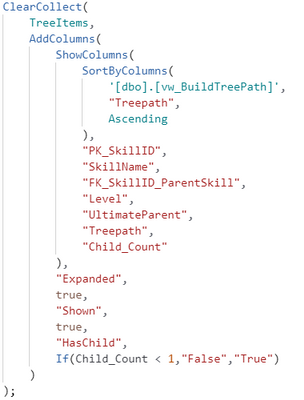 But it does not work with the AllRecords_values collection, set up this way: 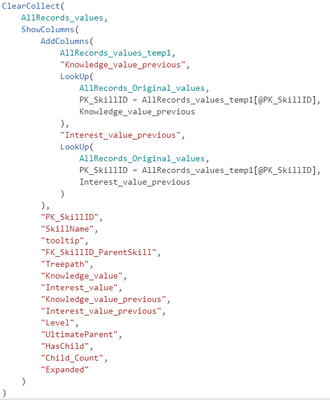 After some discovery it appears Patch only works with Datasources and new Records in collections (https://powerusers.microsoft.com/t5/Building-Power-Apps/Patch-Invalid-argument-type-Table-Expecting-...)

I am guessing that it has to do with how the ClearCollect is being done differently between TreeItems and AllRecords_values. The TreeItems has the dbo in there where the AllRecords is referencing another Collection. I do not know how to alter the Patch function to work with the existing code.

I am looking for help with either: using a different function other than Patch or finding a way to make the Patch function work (if possible). One of the users in the Powerapps forum i linked mentioned the UpdateIf function, but I have no idea how to apply this as i dont want to break things while trying to fuddle around with it. Thanks for any help or pointers in the right direction!!!