Patch to existing record on sharepoint list based on person

with the following types: 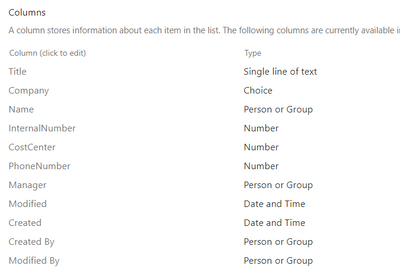 I'm creating an app where users will populate our list at the first time they logged in. They will have to fill the following fields and save: 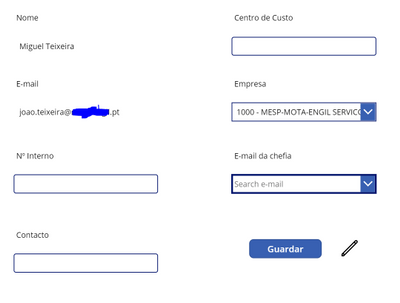 My issue is at the Save button. I want to patch as a new item at the first time, but then if the user make some changes I want to update the item on sharepoint list. In order to do that I need to do the lookup based on the Name Column on Sharepoint because

it represents the user and the user().FullName or User().Email will never change.

When I try to apply LookUp(Users, Name = User().FullName) on patch function it doesn't work.

Someone can help me with this, and also with the if function that I need to create based on the Name to see if it is a new record or an update?

Can you try to use a context variable:

and use this variable inside LookUp formula.

Sorry, I'm a newbie on this, I didn't understand your suggestion.

The idea is to use update context on lookup how?

I think I had a similar need to compare what was being entered to what was already in the list and found it in these very forums. The link below may help but you'll definitely have to do some tweaking to the code like I did for your needs. I hope this helps.

In the example by @gabibalaban the variable named currentUser was set to the value of what User().FullName returns, which should be a string (text) value which is the Full Name. My guess is that this function is called as the result the screen control that sets the full name or retrieves it from that control, setting the user's full name in currentUser.

I believe that you would then try your Patch() multi-function call, with currentUser within the LookUp() function as:

for the control that causes the update/modify save operation.

It stills gives me an error. The "=" on Name = CurrentUser is invalid argument. Probably because my Name variable is a SharePoint person or group type of column?

I typically set at the Apps OnStart a variable that looks at current user : Set(_CurrentUser, User())

Then you have several directions you could go. One option would be to have a variable set that decides if it is new or not like : Set(_Type, If(CountIf(DataSource, 'Created By'.DisplayName=_CurrentUser.FullName)>0, "Edit","New"))

Then for your Display Mode of the Form it could be DisplayMode._Type

It is basically saying to count how many items you have that were created by the current user and if it is more than 0 make my form new and if not make it edit.

The other piece to that will be you setting the Items of the Form to the one that was created by the current user.