Power Apps app on Windows 10 devices - Any way to remove the scroll bars (both vertical and horizontal) for the app when it gets smaller?

These are not the scroll bars in the app I am making myself but the Microsoft Power Apps app itself is adding scroll bars when they really aren't needed. Attached is a picture of my app but scrolled to the right and down. My app is just a standard tablet layout app with nothing custom done to the sizing. In my apps screen size and orientation it is on landscape, 16:9, all the advanced settings are on. Is there something I can do to get the scroll bars removed in which the app in Windows 10 is adding?

Do you mean the unexpected scroll bars appear when you are running app in browser? Which browser did you use?

I don't think there is any setting in PowerApps on scroll bar, it is more relative with browser.

Could you check if the Zoom level is too high? Further, you can change to use another browser.

I have tested multiple apps in my Win10 client, but I don't have the issue you mentioned.

Will the scroll bars appear even if you scale app screen to very small with the mouse wheel? Does this situation occur in all apps?

Could you try to change to screen size to check if the scroll bars still show?

If it doesn't work, please uninstall the client and re-install it again.

Hi @v-siky-msft, I appreciate your reply. I wasn't able to do like a CTRL+Mouse Wheel to get the app to shrink or expand (zoom in or out) like I could in a browser (this issue though is specifically with the Power Apps Desktop App for Windows 10, not a browser). Is there another way I could do this for the Desktop app in Windows 10 (From the Microsoft Store)? I uninstalled and reinstalled the Windows 10 Desktop app for Power App from the Microsoft Store, same issue persists in the original app I posted about. I spun up a new Suggestion Box app (from one of the demo's Microsoft provides) and it experiences the same issue that I am having with the original app I posted about. The only difference in the screenshot attached here is I didn't scroll either way but I assure you it looks the same as my other attachment as I scroll up or down and left or right. Changing the screen resolution of my monitor didn't seem to help any that I could tell. I tested on larger and smaller resolutions and the problem still occurred.

Aha, I get you. I have reproduced your issue, but I can make the scrollbar invisible by scrolling the mouse wheel down.

The scrollbar comes about because the canvas has a larger size than your window size, please check the following two images. The first image shows window maximization without any scrollbars, but the second image shows the smaller window with two scrollbars(your situation). 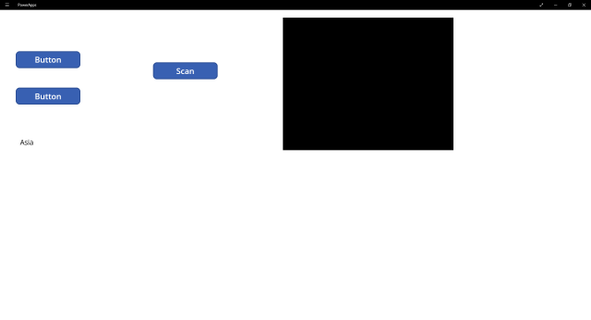 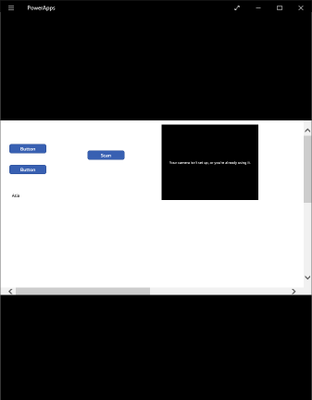 Since you have turned on the 'Scale to Fit' setting, so the second image still shows the whole canvas, but actually, it is scaled.

I recommend you to uncheck these two features, and then you will get why there are two scrollbars. 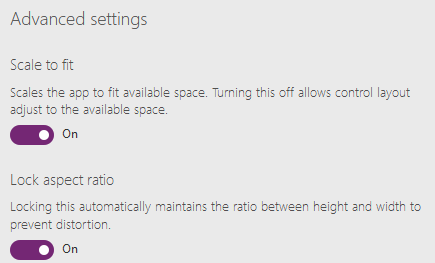 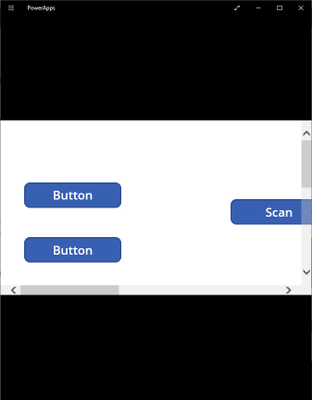 Only show part of canvas

Please try to maximize your PowerApps window or scroll the mouse wheel down.

Hi @v-siky-msft, thanks again for the reply.

I was incorrect on my last post. Doing a CTRL+Scroll_Wheel_Down does work around the issue I am having when the app is shrunk (and scales down automatically) in the Desktop app on Windows 10. A bummer is the end user must do this step each and every time the app is opened for the scroll bars to be removed. Another bummer with this work around is that the text in a drop down box shrinks when this is done as well, other boxes seem unaffected.

I tried turning off "Scale to fit" and "Lock aspect ratio" under the advanced settings. It looks like turning off "Lock aspect ratio" worked to remove the scroll bars! It has some undesired effects but I may be able to tweak the app layout of the form entry items to resolve that, not sure. For example, a rich editor text box looks really large in comparison to a normal text input box when the desktop app is shrunk. Screenshot attached to show that. Is there any way to resolve that you are aware of?

Turning off "Scale to fit" turns them both off and doesn't look very good because it hides the text of screen like you mentioned and it still shows the scroll bars you just definitely have to scroll them to see your app because it didn't shrink with the app window.

Is there any new development happening on the desktop Power Apps player (end user access, not authoring) for Windows 10 (From the Microsoft Store)? Or is it being deprecated? Not sure if it would be worth putting an idea out there to see if the scroll bars can be removed with the CTRL+Scroll_Wheel_Down to prevent the end user from doing this each time the app is opened. Or turning off "Lock aspect ratio" somehow doesn't cause the rich text editor to be so large in comparison to a regular text input box (not sure what else is effected by this right now).

PowerAddict
Super User
In response to ShawnPOWER
A quick comment since I dealt with a support ticket for Windows desktop app for months. The app in it's current form is being deprecated (or at the minimum no support is being provided). A new version is planned for some time in 2020.

One way I have handled similar issues is to create a profile in Chrome. Access the app, do the adjustments you want, and then save the link as a desktop icon. The adjustments remain saved as part of the Chrome profile. Let me know if you want to know more details.

---
If you like this reply, please give kudos. And if this solves your problem, please accept this reply as the solution. Thanks!

Yes, don't turn off the "Scale to fit" and "Lock aspect ratio", it doesn't make your app any more reasonable.

My thought is that since the canvas orientation is set to be Landscape, if you also adjust the powerApps window to landscape 16:9 size(or full screen), there will be no scroll bars when you open the app. The issue really comes down to design. 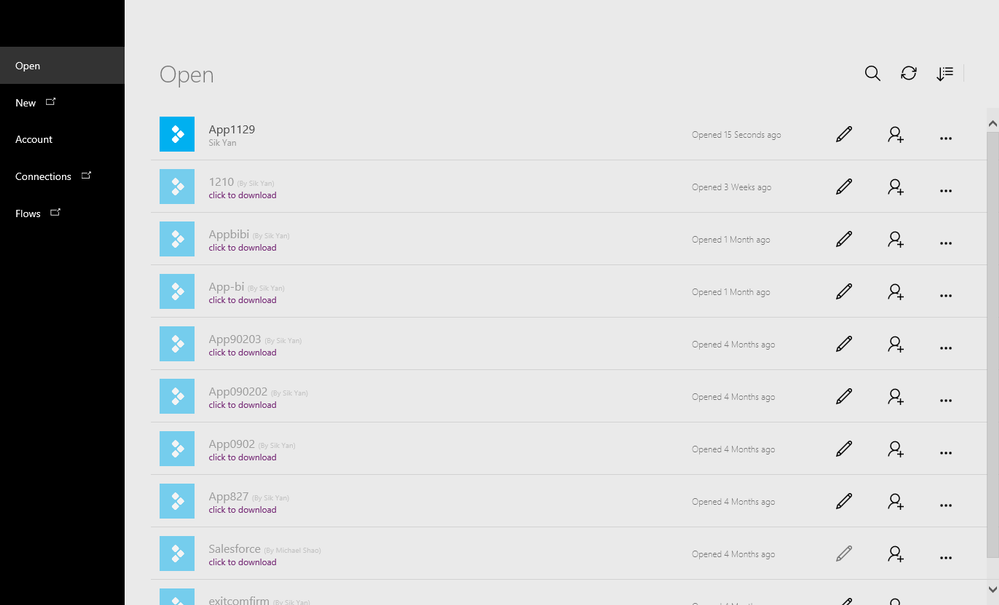 Of course, you can submit an idea to Powerapps Idea Forum, the Win10 client has been deprecated(From @PowerAddict ).

The issue of text in a drop down box shrinks have been confirmed on my side, I would submit a ticket to PowerApps Team.