PowerApp Button pass 2 seperate parameters to a Flow for Powershell

I am trying to understand how to pass 2 seperate parameters ( email addresses for example ) from a powerapps button to a flow.  I have seen how to use Compose in Flow to "Ouput" all emails to the one Output, but I need 2 seperate variables that I can use in my flow to create a file and run a powershell script.

I need to run a Set-MailboxPermission -identity User1 -Owner Mgr1

I understand the concept of

PowerApps Button,Compose,CreateFile ( pshell command in here ), Send Email -- But this only allows 1 output to be passed using "Compose"

1) How would I write this in PowerApps

2) How would I write this in Flow 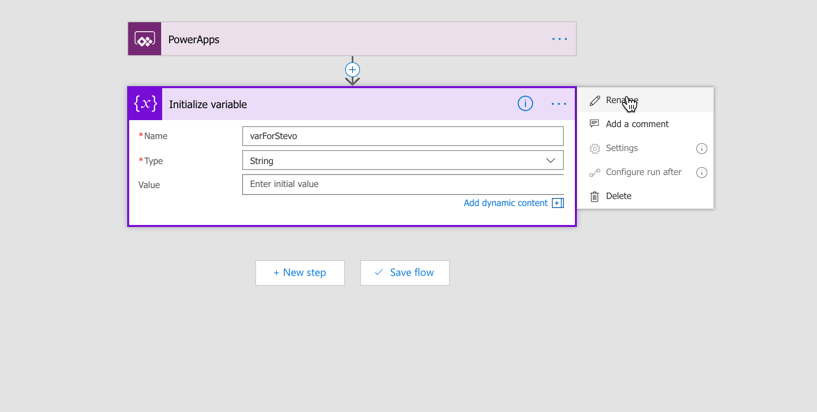 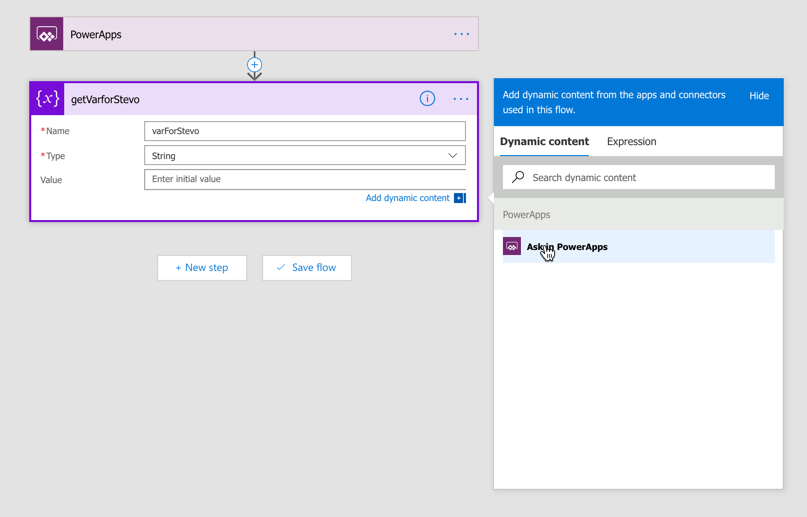 I take it you want to pass two or more items with a flow.  Not sure where you are storing the data, but when I do this in sharepoint I use the ForAll() function. It means there is a seperate Flow for each one

Anonymous
Not applicable
In response to leyburn19
Hi, thanks for responding. I am trying to pass 2 variables from a Single PowerApp button but have them have their own unique variable in flow. This is the formula on the PowerApp, but it isn't working and not even sure this is the correct procedure for passing 2 variables: MultiButton.Run(UpdateContext({User1:MainForm.Selected.UserPrincipalName,Mgr1:Office365Users.Manager(MainForm.Selected.UserPrincipalName)})) This is the flow the button connects to. It takes the input from the button and then creates a PowerShell file on a server with the command that I want to run, this is an example: PowerApps-->Compose*Inputs-->​Compose_Inputs×-->Create file: *Folder path \\Server\upload *File name Pshell.ps1 *File content Set-ADPermission Output -Owner Output The "**Output**" is the 1 variable of both pieces of data from the PowerApp. The example below is how I would like it to be: Set-ADPermission User1 -Owner Mgr1 Any ideas? Steve
Message 4 of 10
25,308 Views
0 Kudos
Reply

Anyone know how this could be done?  is this a combination of "Split" and "variable" expressions inside of flow?

Anonymous
Not applicable
In response to DavesTechTips

Hey dawidvh , thanks for the reply!  I had figured it out using compose --> input and asking in powerapps  ( I was over thinking it with expressions).  I like your idea for using "Initialize Variable" more though, thank you for that.

So now I can pass 2 parameters ( or more )  directly from my powerapp to the flow which will create a ps1 and run the script.

In case anyone is looking to get something similiar to this done, there was a post on it by SergeLuca I believe.  It all comes down to the flow:

The key to do this is creating that watcher script on a server that watches for ps1 files created in a specific share ( the onprem gateway locaion).  This would be a constant pshell window open with a keep alive script.   Once pshell.ps1 is created it sees the file, then it does an invoke-expression on the ps1 whch runs the command.  This can also be done with scheduled Tasks, works great!!

I am having problems doing this similarly but to a Flow for an HTTP web service.  I created 3 variables with Initialize variable which connect to parameters from text input in the PowerApp.  But when I create a button in the PowerApp to call the flow, it just says Run, and does not show to enter the 3 parameters.  Why is that?

Attached, please find the Flow that I created.

Can you please tell me that How to add "testforstevo" function ?