I have an app which we have been working on for over a year now.  To be fair, it is quite big (for a PowerApp) so that may be part of the issue I am about to describe (26 forms, 68 separate data source connections to SQL Server) and well over 400 controls on some form).

This morning, when we (multiple Team members have tried) open the app for editing, all of the properties for every control are blank! (see attached image)

The code is obviously still there as the app runs.  (I have also exported the app and checked the .msapp file contents - code is still there) but it it all just greyed out in the Dev Studio??

I have turned various features on and off (especially the new formula bar) in settings, exported and re imported the app and the same result every time.

I restored a version from a few days ago and this is fine - but we haven't changed any code in those few days other than a couple of label texts!

I think the underlying Power App has somehow got corrupted but cannot seem to find any evidence of this happening elsewhere?

Does anyone have any ideas?  Is the app simply too big now?

This happened to me two days ago. It started behaving normally after a few hours. However, one thing that you can try is to use an older version of Power Apps (authoring version of the app) and see if it works fine.

To do that, open the app in the studio, and go to Accounts. Then select Change authoring version and select 3.2.0082.19 (or any other older version). Then click Reload + apply version. 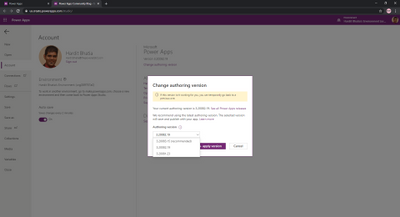 ---
If you like this reply, please give kudos (Thumbs Up). And if this solves your problem, please mark this reply as a solution by selecting Accept as Solution. This makes it easier for others to find answers to similar questions.

Advocate I
In response to PowerAddict

Hi - did anyone else have any ideas about this? I have the same issue just reoccurred and no matter what I do I cannot get the app back to an editable state (exporting, restoring old version, etc).  It is bizarre that this is happening with restored versions from months ago, long before this error every occurred - leads me to believe this must be something to do with a changed authoring version or something? (and no, changing the authoring version doesn't fix the issue because the app is left in a state where you cant change the authoring version!)

I had this issue a few months ago and raised a ticket with MS - after a couple of days they were still not able to resolve.  I stumbled upon a solution through trial and error which was to export the app, then import it but to a different tenancy.  Save it, then export and re-import it back into our production tenancy.  That "unlocked" whatever was causing the loop or corruption and I was able to continue.

However, this time, that "workaround" isn't working and I am left with a broken app!

Anyone with any thoughts?

Running into  the same issue, but from the SharePoint side. Form loads up in the Designer, but the properties are greyed out and unavailable. The issue seemed to occur at the same time that the SharePoint Integration also started having issue reading the data source. Unfortunately, do not have the option in our organization to roll back to a different version, so looking for some guidance.