PowerApps for Windows Desktop Client - DOES NOT SUPPORT LATEST RELEASE!

I want to start this post with saying that you guys have made some incredible improvements over the past year, and despite some ongoing issues, I have been able to work around most problems up to this point...until now.

As of yesterday, I finally completed an updated release of an app one of my clients uses in the field.  It now has true offline capability, a major feature requested by said client.  Imagine my suprise when launching my app for testing on the PowerApps Windows Desktop Client that it's not compatible with Windows!

When running my app in the Windows client, I am greeted with the following error:

In addition to this error, my app does not sync any data.  My clients have been running this app on Windows 10 devices up to this point - and now I have to tell them to use a tablet or else they can't utilize the Offline Features.

Because of the above, can any Microsoft reps please comment on the following questions:

This is a major issue for me at the moment, I cannot recommend a product to my client when it doesn't even work consistently on their chosen platform.  The Windows Desktop App is even shown as supported on the System Requirements page!

I have posted several issues in the past that have received little to no response from Microsoft representatives...however this is a major problem that might tank a project - can I please have some feedback from a member of the Microsoft team?

If you want the PowerApps Studio desktop functionality to be improved/updated, please submit an idea to PowerApps Ideas Fourm:

My issue is that I cannot run an app that I recently completed in the Windows Desktop player.
This is contrary to what this article on PowerApps System Requirements says:

If this is a known issue, where can I find information on it and when it will be fixed?
The PowerApps desktop player was working just fine for SaveData and LoadData on my app up until last week, my most recent update.  There has been no update to the PowerApps Desktop App that would have disabled this function.

Is there an update to this? There is no need for an idea submission, we just need to know if the desktop player is going to be supported or not. Lot more organizations are using this stuff. Need to know please. 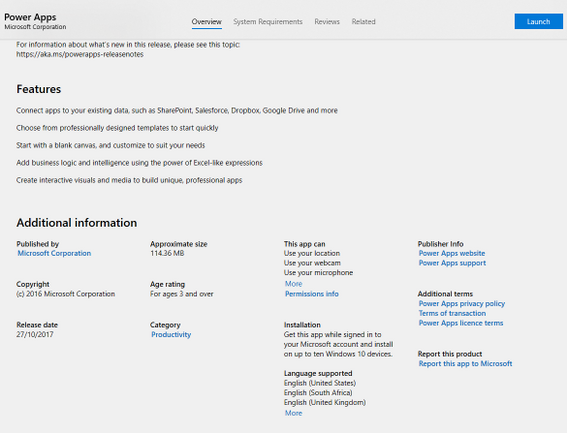 Thanks for the feedback.