I had tested the Push notifications when the blog announcing the feature had first appeared and it had worked fine. However trying it today, I'm having a strange problem using notifications on Pcs.

I created a test app and have a button that's sending out a push notification, on the iPhone, it works fine, hit the send button once and I get a single notification.

However on the Pcs, the notification keeps popping up several times, when you would expect it to show up once only.

Is this a bug or am I doing something wrong?

Are you using a flow to send a PowerApps Notification?

If yes, could you show me a screenshot of the Output for the action “Send Push Notification” ? 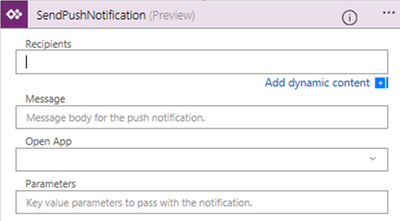 @v-yamao-msft sorry for the delay in responding to you. I'm not using Flow, instead I'm using the Send Push notifications feature/control as indicated in this Blog post by Laura Onu https://powerapps.microsoft.com/en-us/blog/add-push-notification-to-you-app-and-boost-usage-and-rete...

As I had mentioned, it worked fine earlier but now on Windows 10 Pcs I get multiple notifications, works as expected with IOS. If you could kindly check and see if you can replicate the issue?

My Windows 10 computer gets the notification 8 times. My iPhone gets it once.

Yes I also get this behaviour - 1 notification to the device, several to my PC.

Can we please have some kind of reaction from Microsoft about this?

Thanks for the detailed information. I will test and report this issue on my side.

There might be some delay for my reply, thanks for your patience and understanding.

I also have this issue. Push notifications comes to my desktop but not to my Andoid device.

Attend for two days of expert-led learning and innovation on topics like AI and Analytics, powered by Dynamic Communities

Join us for the Microsoft Business Applications Virtual Launch Event on Thursday, April 2, 2020, at 8:00 AM PST.