PowerApps unavailable on all lists on one Sharepoint site

We have a Sharepoint site with multiple lists.  Most of the lists have Edit menus that have been customized in PowerApps and are used constantly throughout the day.  Currently the Edit menus are not available for any of our lists on the site.  Earlier today, I edited one of the menus in PowerApps by making a previously existing DataCard visible.  I saved and published the edited app, and now the app is blank to anyone trying to view the newly published version of the app, and when I go to edit it in PowerApps, it just continuously tries to load without success. PowerApps has also been very slow to load for our other apps as well.  All other lists on the same site are unusable in Sharepoint as well - they just continuously try to load.  Our other Sharepoint sites in the company appear to be unaffected at the moment.  How can I resolve this so that we can edit our lists again?  There are multiple crucial functions in those apps that we need, and to recreate these lists and apps would be months of work.  Thank you for your help! 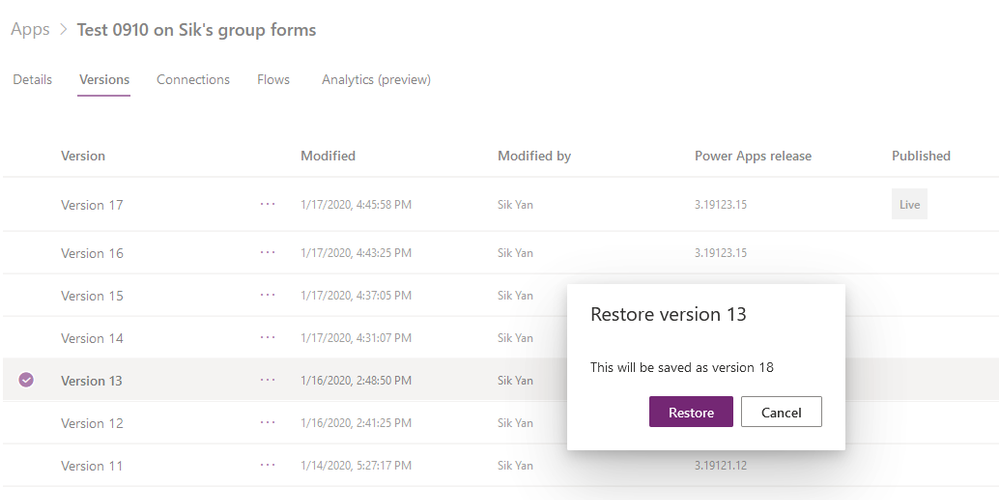 We could not reproduce the issue and we do not have this issue on our end.

Do you still have the issue now?

If so, we recommend you contact Microsoft or make support ticket as soon as you can for this one if you continue to have issues.

Thank you for your reply.  The issue still exists for our original list, but the Edit forms on our other lists on the site are now accessible.  Would there be another way to access the Edit app in PowerApps instead of the 'Customize in PowerApps' button on Sharepoint.  Or would there possibly be a way to revert the Edit app back to the previous version?

Thank you!  Resetting to the previous version worked, and the Edit form is functional again.