I have some issues with the Microsoft PowerApp data with a normal gallery.

We have created an PowerApp and different users work with the app (at this point there are around 7 users). On the first screen there is a gallery where you can search for your database record. After you have chosen a specific record you can edit this record with different forms and save the edited record. This works perfectly fine.

If a second user chooses the same record though (he can choose the record at a different time) he is able to see the changes the first user has made. But if the second user would also like to change the record at the same form, the app creates an error message. The message is called: " ETAG mismatch. clientRequestId: 74405d21-cfd9-4851-8a0a-8e4f43eba335 serviceRequestId: 8a11789e-304b-5000-3022-bda74d0afa7b" and he is not able to make any kind of changes on the same record.

It seems like the specific record is locked because of the fact that another user has changed it already. Funny about that is, that if the second user gets offline and logs in again afterwards, he is able to edit and change the record then. But this is only possible if the second user goes offline and logs himself in as well. If he refreshes the database record he is only able to see the changes but receives the error message as shown above.

Now I am searching for a suitable solution how users can edit this database record after the first user has done some changes.

Re: Problems with editing the same database record by different users with a normal gallery

Thanks for your feedback, the user @karl and @NigelP have faced same issue within you, please check the response within the following threads:

I have posted this issue to my product team, the Product team is aware of this issue and is investigating it. You could get more details about this issue within PowerApps Support page: 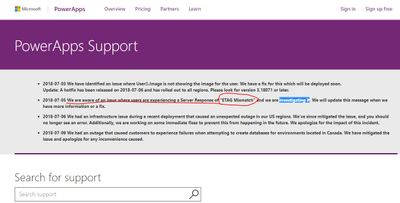 If this issue is solved, I would reply here.

Check out these cool Power Apps & vote on your favorite!

Check Out the Top 5 Entries!