I'm trying to create either an email notification or a push notification that links back to a direct sharepoint list item (say an assignment scenario) so that the user can then pull up the item assigned to them directly in power apps.  Is there a way to do this either through powerapps or flow?

We could use Flow to send a push notification or send an email when a new item is created in SharePoint list.
Send an Email: 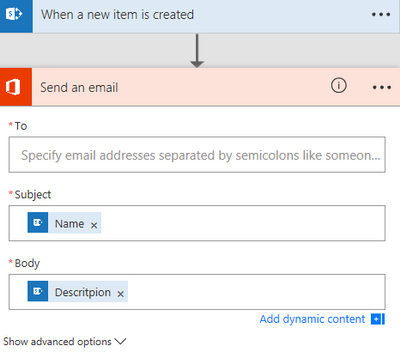 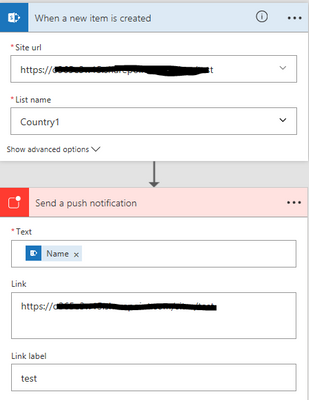 Hope this can be a reference for you. please try if this works for you.

Thanks for the assistance.  The notification is not the issue so much as getting the powerapps to open vs  a web browser when linking to an item is.

For example, even outside of the context of a flow - if you email yourself the direct URL of a list item, it will always pull up in the browser on a mobile device vs the powerapps app - is there anyway to open powerapps directly from a url whether it is provided via email or push notification?

Is there a way to call the application through the link so that it gets opened and passes that ID?

Hi, not sure if I fully understood what you need. Let me try to split the answer:

First, for launching the client directly you can use the ms-apps protocol. Link will look like:

This will launch the app only, so if app is not installed it will result in an error. A universal link will soon be supported.

Now, if you want to receive an ID shared by mail, for example, you can pass it with a query parameter, e.g.:

using the Param function inside an App  (e.g., Param(listid) ) you can grab the value of listid and open the list you wish.

Hopefuly that helps you.

Thanks this is super helpful!  What I am trying to do essentially is to provide a notification to an end user when a task or list item is assigned to them - and link directly to that item in power apps so that they can interact with that task directly.

Is it possible to substitute the list ID for an item ID so that you can link directly to an item vs that specific ID?  Not sure I understand what the list ID is doing if you are direclty linking to the app with the app guid already?

So, let's say User is assigned task ID = abc123 and let's say your Task list is in a table called TaskTable, which have a column called TaskID among other columns.

You can send him a notification with a link like ms-apps:///providers/Microsoft.PowerApps/apps/<App Guid>?task=abc123

This "task" works as a variable name. You can add as many as you want, e.g., ms-apps:///providers/Microsoft.PowerApps/apps/<App Guid>?task=abc123&company=delta

will create two variables called task and company which you can get value with the function Param.

On the app, you can have a call like LookUp( TaskTable, TaskID = Param(task)), so you can filter from your list only the task with that specific id you've sent to user (if you're not familiar with filtering, take a look here here).

Naturally, that depends on how you app was architected, so you might have a better solution or different needs for that.

Please let me know if that doesn't answer your question.

I just found this post and wanted to be able to do something similar,is it possible to direct the User to a specific screen as well?

Using the above examples, if we're dealing with a list of Tasks, I would want to send out the notification whenever a new Task is created, the notification would have a link that opens the app, takes the User directly to the task (which is say on Screen6), is that possible?

Michael
Microsoft
In response to UB400

@UB400, the functionality you are looking for will likely be handled in our next release with a new App.OnStart property that you will be able to modify. This will allow you to pass in the desired screen through the URL as mentioned previously and then navigate to the desired screen as soon as the app starts up based on this information.

How can i pass param to a powerapp embedded on a sharepoint page?