Just came across a scenario where a user acessing via the iOS App did not automatically get the latest version of a Powerapp (shared with Organisation) which I had made changes to and saved earlier.

I thought maybe there would be some lag between saving changes to the app and all users receiving the latest version, so waited about 30 mins,  closed and reopened the app, but behaviour was still the same after this period.

I recreated the issue on my own testing device and found that un-installing and re-installing the iOS app would then show the updated PowerApp. Guessing this issue may be caused by PowerApps caching content on the device?

Although this workaround was succesful, it would be unacceptable to force 500+ users (whom we intend on distributing some of these PowerApps) to reinstall the application and go through the sign in process again, every time an update is released.

Have read elsewhere that users are supposed to recieve a notification when a new version of an app is saved, but this did not happen either.

Anyone else encountered this and have a fix for this issue? Is there any way to force the app to check for version updates in an OnVisible of the first loaded screen?

I have posted a reply to another thread with a solution until Microsoft implements something better.

Update: I've done a little more testing / troubleshooting and found the following steps appears to be an alternative from uninstalling and re-intalling the app:

Following these steps seems to refresh the cache and download the latest version of the app. - tested so far only with iPhone 6 on iOS 10.2.1

Would still be good if there was some way of auto-checking for updates as soon as the app launched. If anyone has come across a way of achieveing this please share, would come in handy!

Did you finally find an alternate way to force update the powerapp on client devices to the latest version. I am facing similar syncing issues & am looking for a solution.

Im finding publishing to be very problematic at the moment also.

Even with the web player.

iOS is hit and miss whether it updates the app.

Testing in the create session works perfectly, when i open in web player or ios, lots of invalid mashups about columns which are not even in the table its trying to collect.

This is the first time i've had sync issues, haven't created an app for a month or so..

I changed the app icon and synced straight away but none of the data worked..

Has anyone found a fix??

Impactful Individual
In response to phil1

Ive found it akes around 5-10 minutes for it to work.

when you see it say downloading, its pretty close, although can still take another couple of close and refreshes.

I have posted a reply to another thread with a solution until Microsoft implements something better.

I have a fool-proof method that forces an app update 100% of the time on tablet, mobile, or PC.  Store the app version number in your datasource, then hardcode that same number into your app.  When the app is opened you can check if these numbers are the same.  If not, prevent the user from going any further and give instructions on how to clear the cache/force update. 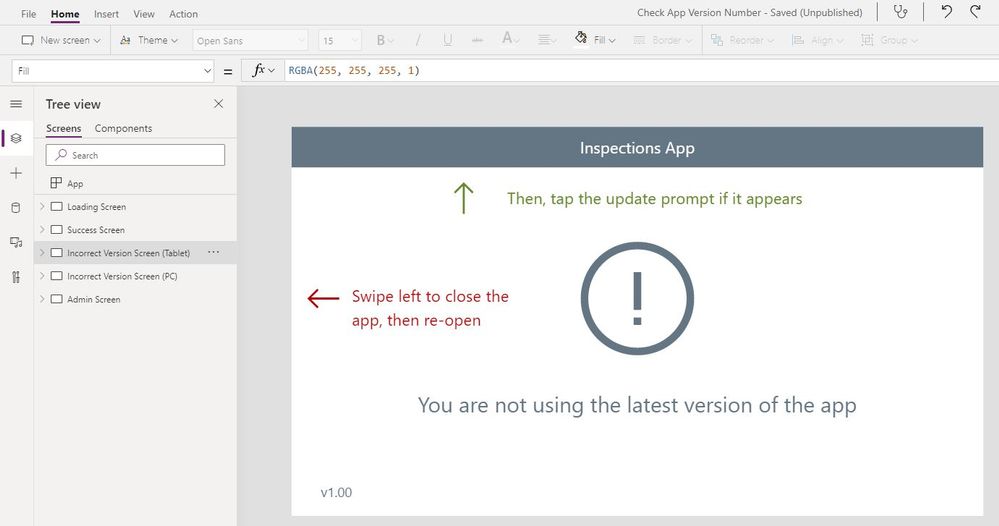 ---
Please click "Accept as Solution" if my post answered your question so that others may find it more quickly. If you found this post helpful consider giving it a "Thumbs Up."