I'm trying to get data from a PowerBI dataset in to a PowerApp collection without requiring any premium connectors.

I initially tried creating a flow to return the data using the "Run a query against a dataset" action but that powerapp action to return the result only allows for a text string rather than a json/table/anything that maps to a collection. I was able to use the "Response" action and it works, but we don't have general premium licensing for end users.

I noticed there was a PowerBI connector within PowerApp which seemed ot have the same function available so I gave that a shot, but it doesn't return any data. If I hover the formula bar, it states "This formula has side effects and cannot be evaluated". The arguments seem correct, if I change the DAX query to Portfolios for example, it does fail stating the table is not found so it is connected to the dataset to some extent.

Has anyone used this connector/function successfully? I can't find much documentation on this other than the fact that it exists.

I get a collection with a table, but the table is empty. If I add .firstTableRows to the collection formula, its also empty. 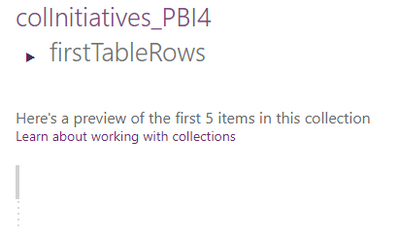