I just closed a previous post under the Subject: Re: Cannot delete Lookup field. In that post i forward referenced the following additional remarks, and i pose two new questions.

In our case, we have an entity that always has records generated by our users when they "modo up." These Modo entity records represent risky activities upon which our members have embarked. If they don't "modo down" at the end of the activity, we create a Search Incident record tied to the open Modo.

Therefore, in the child entity, Search incidents, we create a relation called Modo_Incident using the Modo entity as the parent.

Here's the trick: you don't have to do anything else. CDS makes a new field in your child entity (viz., Search Incident for us). This is how the Relationship property values appear in the Search Incident Fields UI:

Note the disabled color, just like all the other System-controlled properties. I would have been less confused yesterday if the elipsis simply wasn't visible on properties I cannot control.

Regardless, the next thing i learned today was how to start using this new Lookup field in PowerApps. As I read elsewhere, when you create a PowerApp that depends on an Entity with a Relationship, dropdown controls provide the optics for the Lookup field in the parent entity, and you select the value in the child record from the list of all values in the parent entity field. In our case, we wanted a list of all Modo Id (PrimaryId) records. 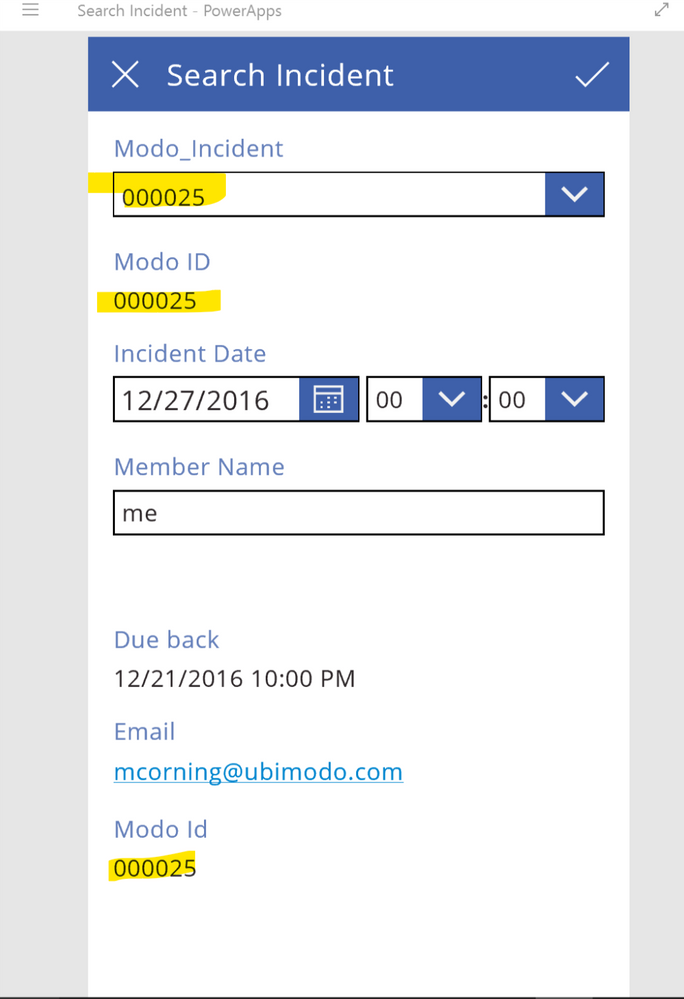 No here's where the first question comes in, and I think i have the answer, myself: Before today, i simply had a text field i used to manually enter the Modo Id of the Search Incident's parent Modo (that's the middle highlighted value). The problem, of course, was that my (late-bound) brain made little distinction between 000025 and 25, though the type-safe PowerApp would not find them equal. So the question is: do we need the Lookup field only? The answer seems obvious: Yes; but instead of a PowerApp using a formula like this to populate the bottom of the screen above:

where DataCardValue2 points to the Modo ID textbox

So now my second question (and one for which i do not have a ready answer): if i can drop use of the textbox, how do i bind a new Search Incident to a Modo at runtime in my Flow where the PrimaryId of the new Modo record becomes the input to the Modo_Instance[.PrimaryId?] in the subsequently created Search instance record?

I guess the answer is at my fingertips. I will create a Flow that creates a new Modo record then simply assigns the Modo_Instance field in the Flow to the value of the Modo Id[PrimaryId] in dynamic content. i won't be surprised if it's that easy.