Thanks, PaulD1. I really appreciate the feedback and I will keep these things in mind.

Encountering the same issue on a 3-screen app with one of those screens with 650 controls. It really isn't that complicated. It's about 50 fields built for a desktop experience and I just spent 3 hours trying to reposition 5 controls because everything takes 5 minutes to move and on some occasions doesn't even move where it should and each time I have to wait on "Please Wait".

totally agree with this post.!! i have the same issues. my application follow all best practices regarding performance, etc, but is a fact that the problem is because the amount of controls or pages in my app.
the main point is the application run perfect when is published, so, i think microsoft should delivery a better tool to develop this low code. (desktop app or a more robust app web editor)

Yep - I'm having slow issues too - regardless of the size of the App!

Wanted to change a true to a false, took about 30 seconds of waiting, and when I double checked - it hadn't even changed the value, and left it as it was!

I think it's something to do with "AutoSave", as we get the same issue in a Word Document (random freezes for a couple of seconds where it ignores your typing - a real nightmare fore somebody that types with more than a single finger)

Come on Microsoft - you're slowly making all your applications unusable, and in some instances, forcing customers to move to your competitors...

Hey anybody have a resolution to this? State agency here and we were humming a long quite nicely building a portfolio of business improving apps and as of a week ago, intellisense is terribly slow in recognizing basic functions in small apps.  Its a huge drag on our development process.

For simple formulas or text entries with no calculation the lag is about 20 to 30 seconds, for more complicated formulas it can be over a minute. To further add to the issue sometimes when a basic formula or control to reference is entered the lag causes portions of the entered text to be removed when it finally does catch up changing it to something that doesn’t work (i.e., ‘Parent.Width’ might become ‘Pnt.W’). Sometimes the lag can be so long that I receive a browser time-out error thankfully so far I have been able to select the wait option so as not to loose my recent work by leaving, but it is concerning. 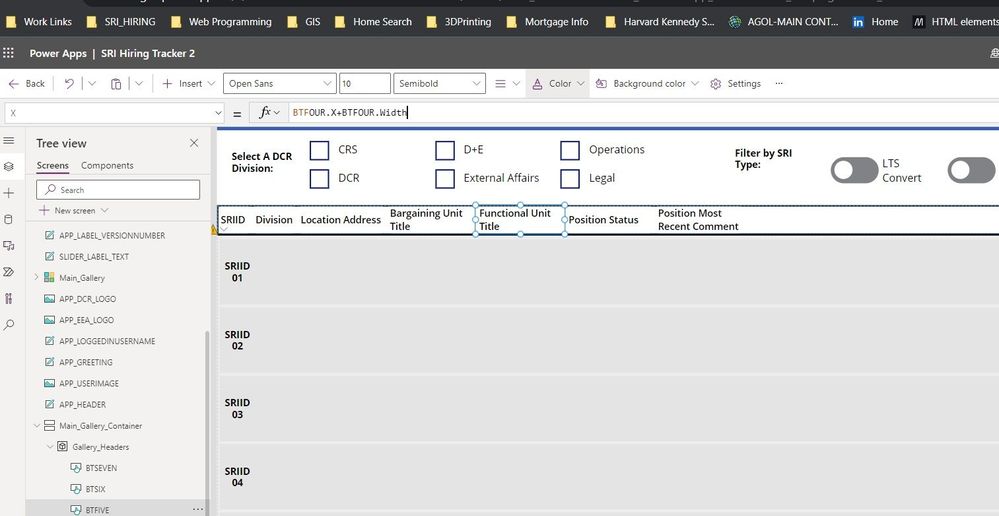 Same here, major production flaw. It’s not sustainable to develop under these conditions. Basic property changes take a long time to register, often times getting a ‘not responding’ dialogue with the option to ‘wait’. This issue needs to be pushed up.

I concur that the App Checker is insanely slow! The editor takes ages to load!

Granted, the zipped export of my app is 16.5MB in size and I have eight screens and well over 500 controls, lol. Six of those eight screens give a "Too many controls on one screen" performance warning, and one of them has over 1000 controls, lmao I know, I know...

But look: Despite having apparently around 3,000 controls, the app works amazingly well on iPhone via iOS Power Apps app and desktop via Edge browser. No sluggishness at all in the user experience. The only issue I see consistently is that the PDF viewer crashes the iOS Power Apps app. I think I can fix that by loading one document at a time instead of retrieving several related documents to display as the user selects them. I will instead display buttons to select each document and the document won't be retrieved until the user selects it, and selecting a new document will clear out the old one.

@james_hathaway mentioned AutoSave, and I also posted about how the "AutoSave Every 2 minutes" setting seems to increase sluggish performance here. Making any edits at all to my canvas app in the editor seems to, at times, instantly AutoSave no matter what. The smallest changes can lag out the editor and cause the last AutoSave time to update, even if making updates within seconds of the last update or save.

Disabling AutoSave seems to have helped a bit, but I suspect that disabling "App Checking" would give the largest performance boost (aside from cutting down the app to much less useful version with fewer screens and fewer controls per screen). However, that feature is one that I use heavily. Much better to catch errors on the fly as opposed to at "compile time", whatever that means w.r.t. Power Apps. The App Checker seems to get hung up and insists that there are errors when there are not, and only after a long period of time will it finally resolve.

If I disable the App Checker, one little typo in syntax might totally screw up everything by the time I finish editing a large block of code. Maybe I should just "git gud"? There really ought to be a desktop editor for Power Apps. My machine could handle the performance requirements, I'm quite sure. I run two Hyper-V W10 pro VMs with 16GB of RAM each and still have 32GB of RAM left to spare. I'm insanely bad about keeping too many Edge tabs open (because I'll lose context on everything if I only open things I'm currently using. "Out of sight, out of mind").

Oh crap, I just went through the "Upcoming Features" section of canvas app settings, and I see no way to disable the App Checker. I thought there was a way to make the editor stop pre-calculating errors with every keystroke, but now I'm not sure which setting it would be... Very frustrating. There should be a way to manually run the App Checker when the user is ready!

The Microsoft Power Apps team needs to acknowledge that canvas apps are being used to build complex and sprawling applications which can't possibly confirm to the 500-controls aspect of the recommended best practices.

If I wasn't doing a pretty decent job of following most of the best practices, my 3,000-control app would neither work in "Play mode" nor in the editor. It would be unusable. But it works great, and until fairly recently, the editor wasn't all that bad. The footprint of my app —both in terms of exported size of .zip file and in terms of number or controls and data connections— has not changed substantially from when the editor used to be much snappier for me. In fact, I've reached a point where development has very nearly slowed to a standstill. The rate I'm editing the app is now at a crawl (because I'm busy and also because I have fewer things now to fix or add on to), and yet seemingly within the last few months the editor has become nearly unusable.

Don't blame me for making a big app! I blame Microsoft for a poorly optimized editor which is only available in browser! Make a desktop editor!

Edit: I should clarify that the exported 16.5MB .zip file is for the entire solution, including all cloud flows, connectors, and custom connectors. And now that I think about it, there is a duplicate version of this app in there which I use to test edits which might break things. So, the actual size of the app is substantially less than that. If I push an update to the app (meaning the app is no longer loading from cache), it loads on iOS over cell network within like 15 seconds. It loads on desktop over wifi in roughly 7 seconds. Every screen is fully usable and snappy within 7 seconds. Performance is only an issue with the bleeping editor!

Same thing different day.
Does anyone know if MS has said anything about this?

I complained about this three months ago, but shortly after that it got a whole lot better!

About the end of October or beginning of November, I believe Microsoft updated the PowerApps editor interface and that update significantly reduced the lagginess I was experiencing in my large canvas app. Without changing anything in my app, the editor performance increased tenfold or a hundredfold overnight.

Specifically, this was the update that, among other things, refreshed the UI for the "Save" button and the "Publish" button. Whereas before you had to open a menu to save or publish a canvas app, the new update puts them in the top right of the editor interface, accessible at all times.

Well, they must have also done something to improve performance in that update, because for me the difference is like night and day!