Subgallery bug when trying to change to other screen

I have been working around with a subgallery thas is causing a strange behavior. I have the next screen in PowerApps Studio. It has a roles gallery and a users subgallery whose belong to those roles.

Eeach item of the subgallery has a button to edit the selected item which takes to the user role edit screen.

The actions of the edit and new button works perfectly inside PowerApps Studio but when I publish the App and access it trought  the "Web Link", the "play" button  or access trought the phone/tablet I cannot achieve the user role edit screen. Instead of that the App crash  and a black screen appears like it is loading something.

I discovered that if I delete the subgallery I can access the role edit screen perfectly.

This is the onselect action of the new button:

This is the onselect action of the edit buttons:

I have tried the following without success:

This only happens in production mode. Testing it on the PowerApps Studio everything it's ok.

Anyone has experienced the same?

Re: Subgallery bug when trying to change to other screen

Could you describe more clearly about "access it trought  the Web Link or the phone/tablet I cannot access the user role edit screen"?

Did you just copy the web link in browser to run the app?

I suggest you run it in PowerApps studio. 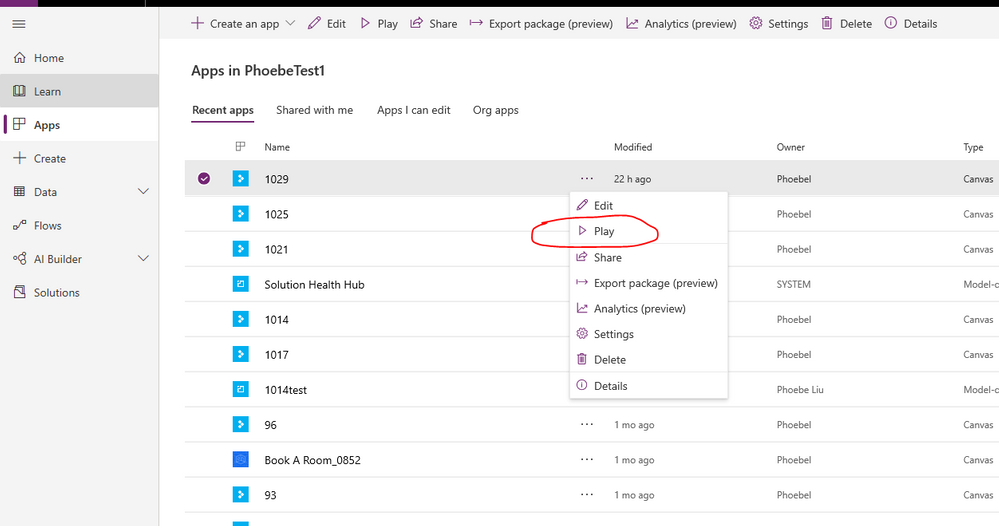 Only if user has permission to this app could run this app.

I also suggest you clear your browser's cache, update it to the latest version and try again.

Also, please check whether your system meet the requirements:

You also need to be in a good condition of network.

If your problem still exists, I suggest you ask for help here:

Community Support Team _ Phoebe Liu
If this post helps, then please consider Accept it as the solution to help the other members find it more quickly.
Message 2 of 3
112 Views
0 Kudos
Reply
Highlighted

Re: Subgallery bug when trying to change to other screen

Yes, I have test everything as you describe in your comments but nothing works. I'm going to pick up a ticket in the link you have provided me.

We are excited for the next Super User season.