ThisItem statement not pulling through

I have a label that has this statement "Notes: " & Thisitem.AdditionalItems It doesn't give me a red x so it works and the notes appears but nothing pulls through. Has anyone seen this by chance? 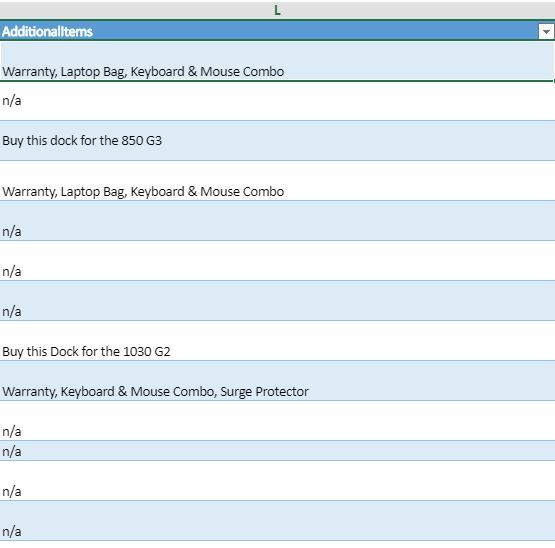 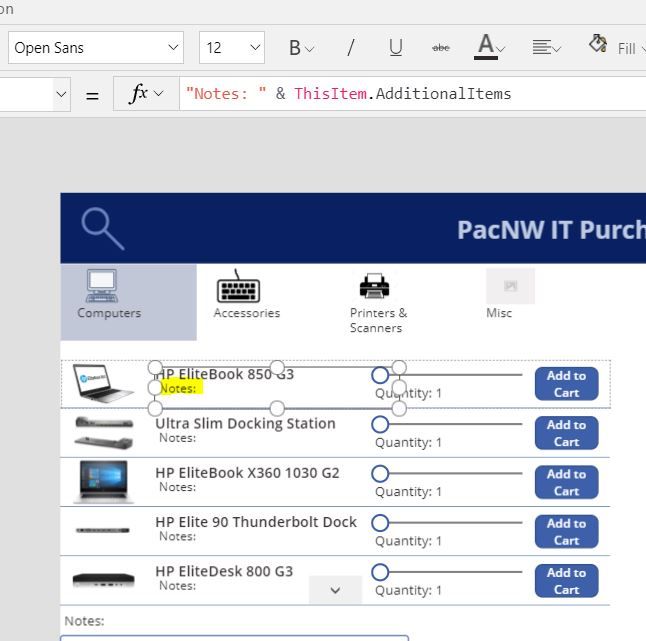 I assume you are using a ThisItem to get the computer and dock names so it is working for other entities, right? You could look at the collection to verify that the 'AdditionalItems' column is there and maybe try an alternative approach like LookUp to see if that works.

I have encountered times when the ThisItem was in an error state but it didn't show the error, usually when I copied a gallery from somewhere and remapped the data source but forgot to change some of the references.

Resident Rockstar
In response to wyotim

I forgot the Notes text. It would look like this with that included:

Your formula is close but needs some adjusting.

Let me put an explanation of the LookUp function in. The syntax is like this:

LookUp(Table, Formula, Column to Display From).

The Table would be your data source, which from what you said should be Devices.

The Formula is a comparison of two items and can be explicit, like Flavor = "Chocolate", or part of a reference, which is what we are doing. So, we would need the name of the column (from the Devices table) that has the "HP Elitebook 350 G3", etc. in it and then the name of the label in DeviceGallery that has that text in it. I attached a screenshot below to hopefully help with that explanation. So if the column where the "HP Elitebook 350 G3" and other items are found is called DeviceName, and the label in the gallery where that text is displayed is called DeviceNameText, it would be DeviceName = DeviceNameText.Text.

The Column to Display From is the column that you want to display the corresponding value from. In your case, it sounds like additionalitems should be what you need. You don't need the Selected in there, just the column name.

In my example below, my data source is a table named Table1 from an Excel file named ScheduleTestData. The label with "136" in it has the formula ThisItem.EmployeeID in the Text field and is named Label3. I want to look up what is in the Location column based on whatever text is in Label3 by comparing it to the EmployeeID column in Table1. 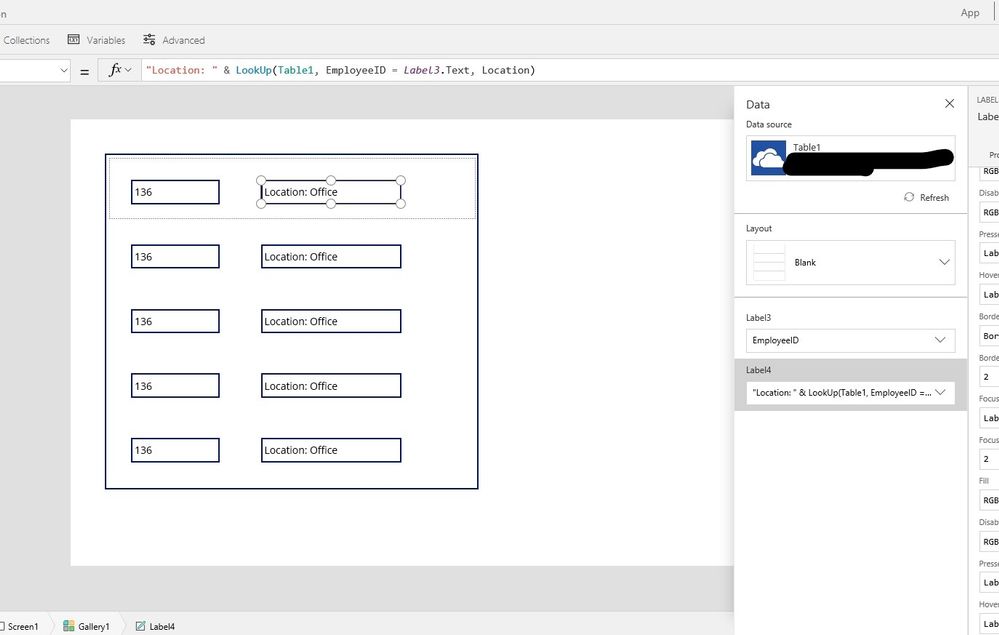 Hopefully that helps a bit. So, we need the column name and label name where "HP Elitebook 350 G3" is to complete the LookUp.

I am sorry. For some reason it is not clicking.

I am getting closer, here is my formula I built

No worries! Your formula is pretty much there aside from one change. Make it:

That should work but if not, we'll keep at it until we get there.

No Dice... but I was close I attempted that one above. It is giving me an invalid argument error. Thanks again

Here is the Table

Here is my gallery