I have two PowerApps environments:

I have created an PowerApps Solution inside my Test environment which includes the following:

My App and the Power Automate Flows use the SQL Server connector to interact with an Azure SQL Database and the Office 365 Users connector. Now that I am happy with the functionality of my App, I would like to migrate it from my Test environment to my Production environment. According to the documentation (export and import) this should simply be a matter of exporting my Solution from the Test environment (as a Managed Solution), then importing it to the Production environment. Step 6 of this documentation states:

If your solution contains connection references, you’ll be prompted to select the connections you want. If a connection does not already exist, create a new one. Click Next.

I have tried creating the required Azure SQL Database connections during the import and after the import but neither seems to work because when I try to edit or run the App inside the imported solution I am presented with a permission dialog where the "Allow" option is disabled. 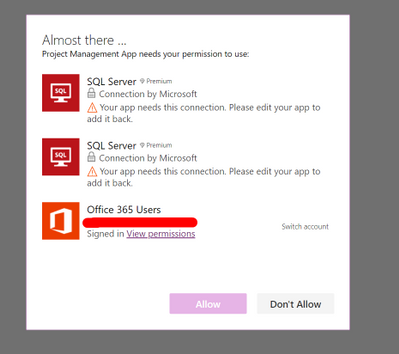 What I have tried:

The weird thing is that a few weeks ago I successfully imported a Solution from my Test environment to my Production environment and didn't have any issues.

Any suggestions would be appreciated because I'm out of ideas.

Is your issue resolved ? Can you suggest me how to solve the issue ? I am getting the exact same issue.

I reached out to the Power Apps support team and got the following response, after completing the steps everything worked as expected.

There is a possibility that you forgot to save the app after you re-added the connections last time. Hence the old connections are still there in the backend and that prompts the message.

Therefore, could you please follow these steps and let me know the result?

I believe the "secret sauce" was the saving and publishing of the app without the connection, before re-adding the connection - I was doing the remove and re-add at the same time, then publishing.

I hope this helps.