Unable to add a form to a datacard within a canvas

I am having an issue where I am unable to add or copy/paste a form into a datacard. I use a canvas with a datacard within it. I am able to add and copy/paste other types of controls but when trying to add a form, it does not add it to the datacard but rather the root screen.

this is my current structure:

I was able to do this in the past. Did something change?

I had the same problem. I solved it by packaging the form in a container. 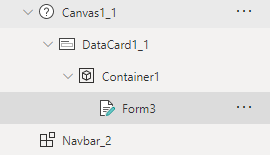 The current authoring version is not allowing it (yet another bug in the current release!  It seems to get worse and worse each time!)

I would put in a support issue on this.

Just good to know it's not just me even though it'd be great if this didn't happen in the first place. thanks for confirming; I submitted a ticket which hopefully will raise awareness.

Very good.  I had a conversation with them today and was told that the dev team decided to remove this functionality going forward.  After I pulled my jaw back up, my response was WTF!!  Since when does a dev team decide to remove a feature that has been functional for years without ANY notice at all.  Was told that there was an issue and they decided to cut the feature rather than fix it.

Really?? This is a major function of the app design - the ability to have your forms be part of a scrollable portion of the screen through a Canvas/DataCard.  What's next - discontinuing data connections because there might be a problem?

Any my follow on question was this - if they have decided to cut the feature and you cannot create new form-in-datacard scenarios, what does that mean for apps that have all been built with this ability - they work today, but will that just be turned off at some indiscriminate date?

As you might tell - Not happy about this response!! 😠 And perhaps it is not a real response but a "canned" general response (especially since they mentioned I should post this issue on the forum for help...LMAO!).  The call is still open on this and there is some follow up that is promised for a better response...so, we'll see what comes from that.

The ONLY annoying but good news is that you can still do one of two things:

1) Revert the authoring version back and then get the form in the datacard, save and then return to normal design.

2) Modify the msapp file and add the form where you want yourself.

However, in regard to #1, eventually the authoring versions that will allow it will disappear from the list of options to revert back to...so that will leave the super annoying task of doing #2.

I will continue to stay on top of this from my end, and I encourage you and anyone else that relies on this feature to do so as well.  Not only because it is needed, but because this is just not right!!  You don't just cut functionality that is this major without some notification or details to adjust.

Advocate IV
In response to RandyHayes

I am pretty disappointed to read the response you were given. I am 100% dependent upon canvas' in my application to simulate a Single-Page Application which supports hundreds of users. Your suggestions are probably the route I will have to go and appreciate you sharing them. Kinda funny a low-code platform requires this type of effort for functionality that was already there in the first place. I sincerely hope they reevaluate this decision and I'll work with the support staff through my ticket too.

I had the same problem. I solved it by packaging the form in a container.

Wow, interesting. I tried using groups and it didn't work but didn't try containers. I can confirm that packing a form in a container on the root screen and copying it does work. Seems to defeat the purpose of the change in the first place but I'll take this workaround over an overhaul any day. thanks.

I was wondering if a container would come to the rescue and hadn't had a chance to try it.  Thanks for verifying.

The only thing I can say at this point is - be careful!!  I am in a bit of a heated discussion with the team about the arbitrary decision to remove a major feature that has been tried-and-true and working for years - without any notice or warning.  So, the caution is...how long until they decide arbitrarily to not allow it in a container, or to not allow the container in the datacard?  (or until they decide to not allow galleries to be used!!)

This leaves a bad taste!

Any update on the above request?

This is very concerning. Not announcing this change means at some point all the existing apps will suddenly stop working whenever they decide to no longer support it for existing apps that are using this solution.

I can confirm that placing it into a Container solves this for now.
This is how this monstrosity looks like: 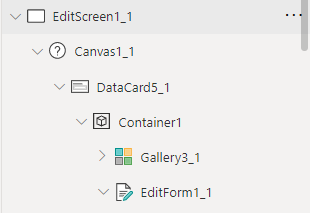