We are using it in the F&O, adding the App ID for the PA: 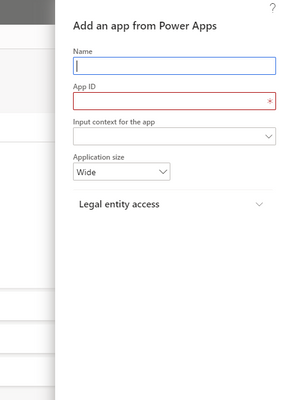 Basically, shuffle between two apps and use the same ID.

I don't want the user to change ID so soon.

In general, I would like to know how to manage versions in PA.

If I developed something and I want to upload it to the configurator, can I?

So if I understood it correctly you have a Power App with lets say Version A and you have a backup with Version B.

You export version A and work on that app on your side, while your colleague restores to Version B and continues to work on it as well. Is this line of thought correct?

If this is the case then the different apps will always have different IDs, as the backups when exported into a copy, once you upload it, they will have a different ID associated to differentiate between the copy and the original.

Hope this helped clear your questions!

Anonymous
Not applicable
In response to rimatos