bug not allowing me to edit app

I created a new powerapp, saved then left the session open. On coming back the session had timed out so I clicked 'resume this session'. Something went wrong and the app wouldn't allow me to edit it. I also tried to edit from the app library, and the same thing happens.

I can open the app fine in 'run' mode, just not edit.

So I created a new app. Saved it a bunch of times. the same thing has happened.

When I try to edit it first takes me to this

when I click the back arrow I get this

I have tried restoring previous versions, and exporting and re-importing as a new app, closing all browsers, restarting, deleting cache, and sharing with another user on a different computer -All exactly the same. 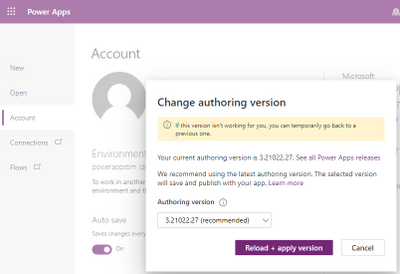 Thanks for the suggestions. I tried to change the authoring version, applied it but now I only see the one version? 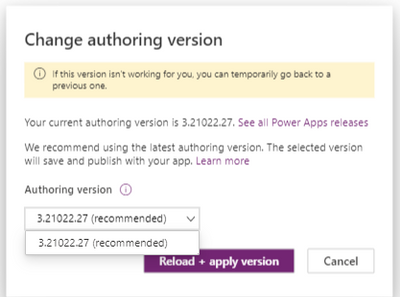 not sure whats happened there.

I've exported the app here. Maybe someone else can try it?
https://1drv.ms/u/s!AgN3RlWvEHCokYJTi7EX8qOnX8u-dw?e=ssDqOD

I've tried opening the app but unfortunately, I get the same issue as you do with it not opening.

It's strange because I can't see anything unusual about this app. It seems to be a straightforward app that connects to an-prem SQL Server, with PowerBI integration and a single component.

I think that there may be something corrupt in this app. I would suggest that you raise a support ticket through the link beneath. This might be the easiest way to resolve this problem.