Hello,
I have a request for which I'm not at all sure if it's possible and if so, how to do it.

I have a powerBI web report that allows the user to apply filters to output specific data in a table, I would like to know if via powerapps, I can make it possible for users to export the data from this table in Excel format?

thank you in advance

Please correct me if I'm wrong:

This is a feature in Power BI. 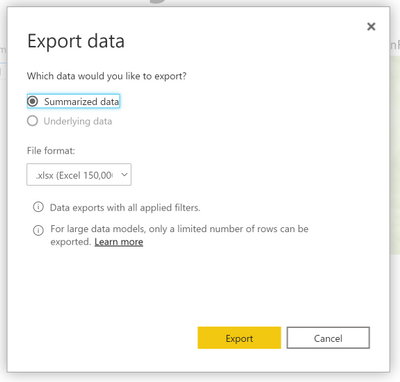 Please let me know if you were looking for something else.

Helper II
In response to Mr-Dang-MSFT

You can look into creating an app that is embedded into a Power BI report using the custom Power Apps visual. I'm going to give a brief explanation but it's best to see the full docs/community content on it.

In Power BI desktop, insert a custom Power Apps visual. You should be able to import it from AppSource. 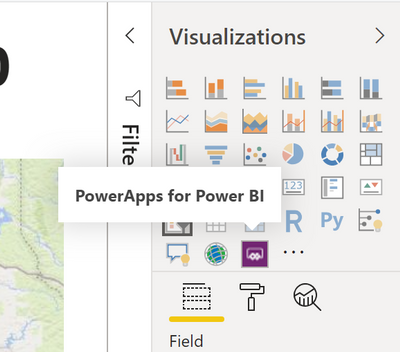 Like other visuals in the report, the app will have the context of the rows that are filtered by slicers and selections in other visuals. The table can be referenced with the PowerBIIntegrationObject inside the embedded app in Power Apps. Something like:

You can filter it and do other things with it as you would any other table in Power Apps.

With the table in Power Apps, you'll need to run a flow in Power Automate that takes the table data and turns it into your file of choice. Making a CSV is not too bad, but making an XLSX file may be more challenging as it's essentially a zip file format.

You would need the flow to create a URL to the file and communicate that back to the app so that it can be launched with the Launch() function in Power Apps.

That's the short of it.

Adding in some friends who can share some resources as this has been done before:

Helper II
In response to Mr-Dang-MSFT

I see that I have to send the data from my table in powerapps to a flow in power automate but I don't know how to do that... can you help me ?

Helper II
In response to AntoineREY

@Mr-Dang-MSFT  ok now I have a flow that can receve the data from my Powerbi but powerbi don't whant to connect a button to my flow can you help?