remove powerapps logo and also have custom URL instead of https://web.powerapps.com/webplayer

Not at this moment. Please consider creating a new entry in the PowerApps Ideas board for this feature.

Community Champion
In response to CarlosFigueira

Our own logo replaces PowerApps logo works fine in iOS, Android and WebApps, but not in Win 10.

This was highlighed since the first day of PowerApps release but no concrete move towards this changes.

This is something really can;t be understood by most of us.

Hi hpkeong, you're correct that you can replace the icon of the apps (created with PowerApps) that are pinned to the home screen, that's correct. I thought the OP meant the main icon for the PowerApps "player" application.

Community Champion
In response to CarlosFigueira

So, do you mean we CAN REPLACE or Cannot Replaced PINNED Apps Logo (as shown inside studio)?

Until now, no concrete answer.

- When you pin the app to the Home Screen, it will have the same icon that you have defined in the app. For example, I changed the icon in the App Settings for an app and saved it to PowerApps:

In the iOS, after I pinned it to the home screen, it will use the icon that was defined: 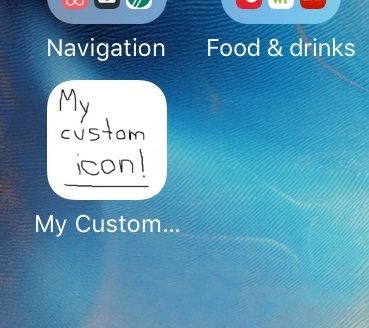 A similar behavior happens for Android as well

Currently there is a bug in the product that the icon is not being used when you pin the app to the Home / Start menu. It should be fixed in an upcoming version of PowerApps, and when this is done the icon will also be used in the Start menu.

You can also "pin" the app pointing to the Web player. When you open an app in the Web player, it will have a URL that will point to the app (for example, my app's address is at https://web.powerapps.com/webplayer/app?source=portal&appId=%2fproviders%2fMicrosoft.PowerApps%2fapp...). The product itself doesn't have a "pin to home" functionality in the web player, but you can create an Internet Shortcut that points to that app, and place it anywhere (e.g., in the desktop), and change the icon in the desktop to be whatever you want. This would need to be done on a per-machine basis, so it's not very easy to do for a large number of machines, but it's doable.

Kudo Kingpin
In response to CarlosFigueira

Now question is can we change web url from

When we sale this to client how we are going to do dev, qa , uat and prod release and to which url's(in case client is using web version)

That cannot be changed at this point. You could technically have your website redirect to the PA website, but I don't know if that's what you want. For example, if someone browses to https://ourproductname-prod/tenders, the web server would redirect (3xx) to https://web.powerapps.com.

Kudo Kingpin
In response to CarlosFigueira

thanks. is there any roadmap or not possible for long time like sp list 5k limit? I am not sure what salesforce.com does when someone sales their solution on top of salesforce. Is it always salesforce.com/anysolution?

I don't know about this specific feature; please consider creating a new entry in the PowerApps Ideas board for this and if it's not in the backlog, it will certainly be added to it.