I have a bot that calls a Power Automate action. When testing in the PVA bot designer, everything works as expected. However, the published version of my bot behaves differently. I can see Power Automate's history that my flow returns the values correctly, however, the bot behaves as if the variables have not been set from the flow and follows the wrong condition branch. I also see this from other nodes where I use a returned value. Instead of the value Power Automate, history tells me was returned, PVA will write out a GUID and not the correct value.

You'll see from the screenshot and the PA response body that it seems to think that HasError is false and that ErrorMessage is empty. 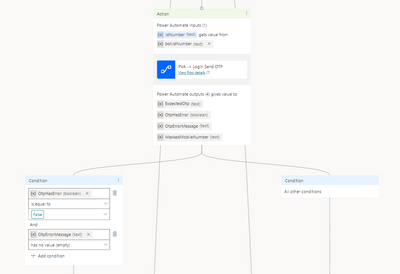 {
"expectedotp": "",
"haserror": true,
"errormessage": "No investor found for ID number provided.",
"maskedmobilenumber": ""
}
The response where instead of the value returned, it writes out a guid:

Just to reiterate: In the bot designer, while editing the topics, it works all the time. After publishing it doesn't work most of the time in either Teams or the demo website.

Any help or guidance would be greatly appreciated.

Keep up to date with current events and community announcements in the Power Virtual Agents community.