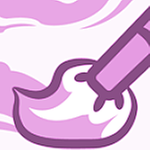 I was working on an internal project a couple of years ago and one of the desired features was to display the date in a Gantt-type chart.  I had already been doing quite a bit with Power Apps at the time so I thought maybe I could do this somehow with a canvas app.   After trying several things, including embedding Power BI, it seemed like a futile effort.

Then one day after playing around with making some bar graphs with some dynamically sized label controls, I had an idea.  It seemed that it would be possible to use some similar techniques to create a data-driven Gantt-like display. The idea has evolved a bit since the original. 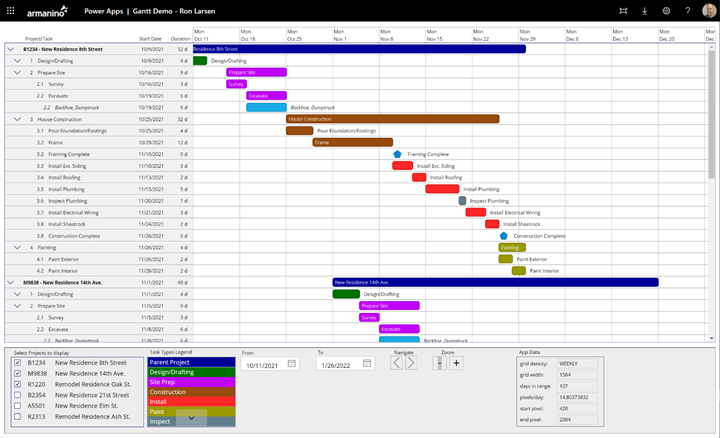 Okay, enough of the boring story and onto the App!

Expand or Collapse to Parent Level

Click on the chevron to expand or collapse main tasks including the top-level project.

The app will automatically scale the date grid density based on the window size and date range.

Select start and end dates to display tasks in that range on Gannt.  Use Navigate buttons to move forward or backward in time.  Use Zoom buttons to increase/decrease end date to effectively “Zoom” the time window in or out. 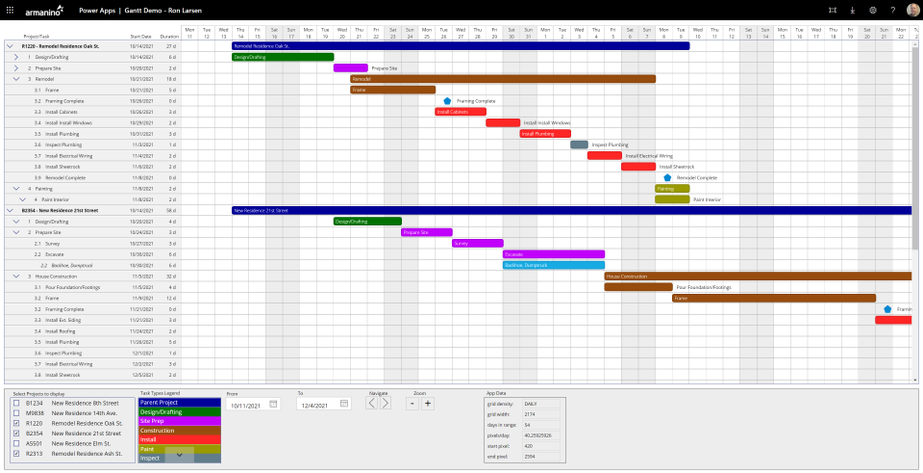 If a task label is too long to put inside the Gantt bar based on the scaling,  it is automatically placed outside the end of the bar.

At the bottom of the screen, there is a project list gallery where you can select the projects to include in the display. 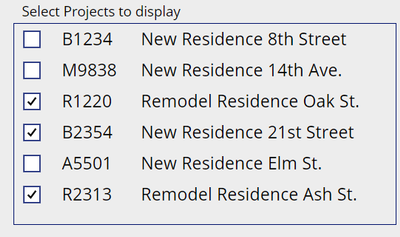 How It All Works

For this demo app, I created some data that is loosely based on construction and remodeling projects.  It is simplified for the purpose of demoing the UI.  I imported the data into the app so that it would be easy to distribute the demo.  Note that I wanted to make the data flat and simple for the purpose of showing the UI.  In a real app, this data would be distilled from multiple tables or views.  I load this table into a collection (colTasks) at startup to make things easier.

About the Tasks data:

The Task Types are in a separate table.  Each type has a color specified by a hex RGB color code which is used to color code the Gantt bars.

The core of this app is how the Gantt bars are displayed.  It comes down to two basic things: Length and Position.

To find the position, we first need to see how many horizontal pixels there are in a day on the grid.

We can get that by using the following calculation:

Then calculate the position X:

For the bar length (width):

I used label controls to track the data to support the above calculations.  Label controls are great for this since they automatically calculate the values as the data changes.  Although these would normally be hidden, I am displaying them in this app for educational purposes. 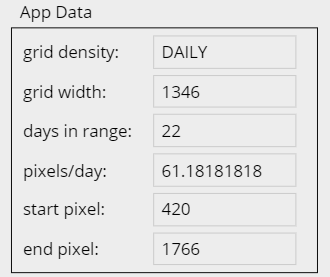 The actual formulas in the app are as follows:

The date grid is just a horizontal gallery control that actually sits behind the Gantt gallery.

The Items/Data source for the gallery is sequence starting at 0.  I figured that 150 should be a safe maximum for most applications.

I have a hidden label (lblUGGridSectionStartDate) that I used to simplify calculating the timeline headers.

lblUGGridSectionStartDate.Text will dynamically change its value based on the density of the grid and start date.

The key to determining what data to show in the Gantt view is literally the Boolean ‘Show’ column in the collection (as well as the selected project, of course).

The Items/Data source for the main gallery (galGanttView):

When clicking on the chevron (icoGVShowHideSubs),  the app will toggle the expanded state of the control and data column: ‘Expanded’ as well as updating the subtasks ‘Show’ column.

The appearance of the chevron icon itself is controlled by the ‘Expanded’ column.

You will find that there are other features there that I have not called out.  But the general idea was to show what could be done with standard controls.  I didn’t want to over complicate things by adding too much for this demo.

This is my first post to the Community Samples.  Hopefully others will find this useful for their projects.

@RonLarthis is awesome, thanks for sharing.  I found a few bugs,

@RonLar This looks fantastic and some of the features are exactly what I've been looking for. I am having trouble uploading the msapp file. Do you have a zip of version this? Thanks in advance.

Your app looks very interesting, however the msapp file is not downloading. Can you recheck the file.

Thank you so much!

For those that have had some trouble with the file, I am uploading new msapp as well as exported solution zip.  Hopefully this will resolve the issue.

Hey, I was working with your project...

Is really nice the way you arrange the data in the gallery, just in case that this help anybody I arrage the way days are changed and also the zoom of the calendar.

Thanks for your app. I will help me a lot with a similar project.

BTW, whenever you click the 'Zoom In' icon it will display the 'slider' to increase or decrease your 'pixels/days', then you can click anywhere an it will hide that option or click back in the icon.

This is an awesome app.  I am still learning PowerApps and was wondering if this could be modified to act as an office vacation tracker?

But can’t figure out how to (or if even possible) to enable multiple events per person?  I guess it would be somewhat equivalent to a irregularly repeating task.  If so, would appreciate any help you could provide or where I can find how to do that.

This is really great - thank you!

However, I am running into issues when trying to populate the chart from a realtime SP list rather than an imported Excel file. I have got it working however I am unable to get the Show/Hide lines to work correctly. I have revised your code for the show/hide to include a PATCH command to update the SHOW / EXPAND columns to true / false, however I am not sure that it is working correctly and I wonder whether the update to server is not quick enough to respond? Many thanks.