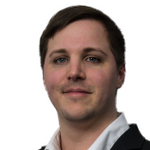 Just posting this for the community to have. This was my entry for the #PowerAppsLoader challenge on Twitter

You can download the .zip file containing the App using the link above as it's 9Mb so too large to post on the forums 🙀 (its the music, without that it's small)

The concept I was aiming for was flying through space and looking through a side window to see the stars going by.

I aimed for four layers of parallax so there are four sizes of image - all of the images have the same source which is contained on the third screen, it is a single SVG gradient line that I wrote.

The large star-trails fly at the fastest speed, they are closest and there are less of them, with the next two layers getting progressively slower and more numerous, and the background layer of trails only moving slightly and then reversing their movement to give the illusion of movement.

Speaking of illusion of movement, what I've done with the trails is have a second copy of each trail, one screen (depending on speed) to the right, then each trail of that size moves to the left based on the current value of the timer, then when they reach the original position that the previous trail was at they all go back to their original position, making it look like seamless constant movement.

Hope you all have fun with it, the music is Fortress Europe by Dan Bodan (free for use) from the Youtube audio library.