I initially assumed it may be something within my connector causing the issue so I create a new blank connector with nothing in it other than a simple action.  I am also attempting to enable the code using just the sample code provided by default to ensure it's not my code causing any issues.  After attempting this several times I tried it out on a second environment and I get the same issue.  Is anyone aware if there are issues going on with this feature? 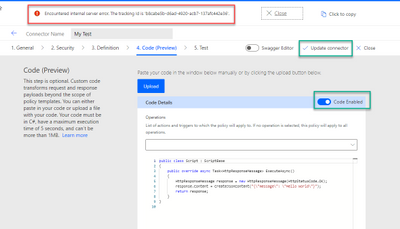 I asked a SME to answer this question.

I was told this might have been fixed. Can you please retry?

Resolver I
In response to Syndicate_Admin

Unfortunately it's still not working, just tried in both my environments again with brand new custom connectors 😞

I will get to you on this.