PowerApps suddenly began failing on my Samsung Android phone. The app works correctly on Windows 10 (Browser) and on IOS. It suddenly stopped working on Android.  I have a home screen icon that is used to launch Power apps; on launch, the Power Apps splash screen and logo appears for a few seconds, and then the app just silently closes. If I clear the data and cache on Android for the app in the system settings, I have to re-supply my credentials, but then it works. However, after I close and re-open the app the next time, it silently fails again until/unless I once again delete the data and cache.

Removing and reinstalling PowerApps from the Google Play store does not cure the problem.

Confirmed that it only works for a single attempt. If I close the app and try to re-launch it, it fails until/unless I clear the data in the android system settings.

Can you provide a session id of your session when you see the crash? You can find how to get it at https://docs.microsoft.com/powerapps/maker/canvas-apps/get-sessionid. With that I can send the issue to the appropriate team for investigation. Thank you!

It is not crashing this way today, of course (Heisenbug uncertainty principle in effect.)  It had been doing so for about a week. I did make some settings changes yesterday that could have affected the problem. I had 'hidden controls' and 'recently visited screens in memory' enabled previously. 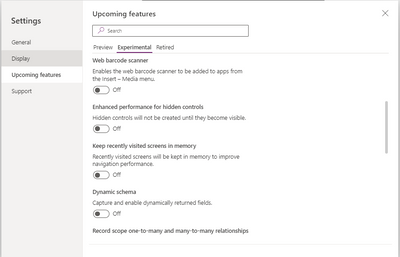