AMA: Is this case Multiplexing?

We've been designing a solution and we are not so sure if it is multiplexing or not.
Here's the case:

We want to develop a front end portal (Canvas App) that receives requests from users (Tickets). This is stored in a SharePoint list.
Then a Power Automated flow with a premium connector reads each new line added in that SharePoint List (Trigger), evaluates some conditions to define the desired process and uploads/creates different type of Work items templates to Azure DevOps.
The file uploaded to Azure DevOps is hosted on Dataverse.

All users have O365 licenses and Azure DevOps. Only one account has a premium power automate license.

Would this case be multiplexing?

According to this I think it is. 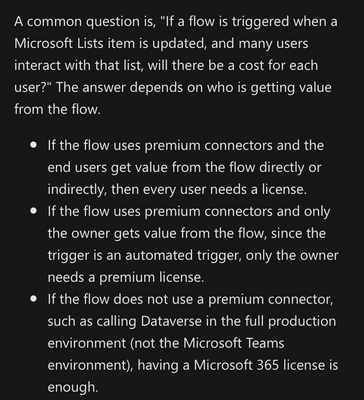 If you don't have too many users per month for the application, if you don't want more complicated maintenance / succession planning, &/or if you can afford it, then look into the $10 per active user per month Power Apps licensing.

Otherwise you may be able to use a Logic App connected to the SharePoint list on a consumption plan. The Azure Dev Ops actions don’t seem to be premium connectors there, so there wouldn’t be any multiplexing concerns.

And even if there were, if it’s on a consumption plan then it is charged per action/run, not per user. Similar to a licensed flow.

Logic Apps are like Power Automate, just in Azure.