Dropbox and Sharepoint Sync Flow, how to Keep a Continual Data Set?

We are migrating from Dropbox to Teams/Sharepoint/OneDrive and will need to slowly cutover users a few at a time due to organizational needs. I have created Flows that will keep the files up to date on both directions. I have two questions:

1) What is the best way to get the initial copy of the data from Dropbox to Sharepoint/Onedrive? Is that just a copy paste? Should I create a Flow for this? Should I go as far as scripting a process that checks for MD5?

2)What is the best way to monitor to ensure both sets of data (Dropbox and Sharepoint) have the same data in them to ensure users aren't creating competing datasets? 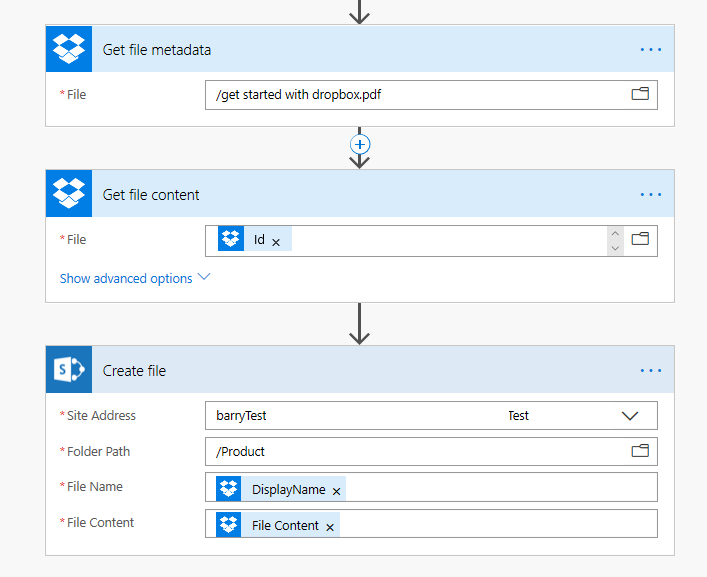 However, if you have files syncing back and forth to each service when they are updated you basically have an update loop - it never stops. It either needs to run on an schedule, or it needs to only be a push from one to the other.

Here are some templates to get you started:

Long story short, it isn't recommend to use Flow for this migration process, Microsoft offers free migration tools, and professional support for this type of migration.

You could probably put together a pretty capable Flow to do so, but it won't be as effecient or reliable as the provided migration tools.

I was the head architect of the the data migration of 15,000 global users to OneDrive, and found the tools provided and the support from Microsoft both to be great.

So there is a lot, in the interest of brevity, that I did not include in my original post.

I know that Flow does not officially support OneDrive. I probably should not have included that in my original post, sorry for the confusion.

I am moving the files from Dropbox to Teams, which stores the files in Sharepoint. I am NOT wanting to do this for user Dropbox Folders, just a Dropbox Shared folder for one large department with an extensive folder structure.

As I said in my original post, this will be a slow rollout of 3-5 users at a time, due to organizational needs, in a department with 60 geographically dispersed users. I am not doing a hard cutover where all the users will transition on the same day. I will have users from the department using either Dropbox or Teams/Sharepoint for the storage until the whole department is transitioned over.

I am aware of the Sharepoint Migration tool. I have done a lot of work with it previously, including scripting mass migrations Powershell to hand to the migration tool. I would prefer not to use that tool for this migration because it is a one direction update.

@v-bacao-msft Thanks for the reply.

I have setup seomthign simliar to what you have there. The problem is that if some creates a subfolder the file/folder is not synce from Dropbox to Sharepoint. Have had sucessful test throuigh several layers of subfolder when created subfolder and file to sync from Sharepoint to Dropbox, but not been sucessful the other direction.

I have seen several example online of folks who used an IF expression to determine if the object is a folder or a file, and then create the folder, but it does not work with more than 1 folder.