we are attempting to move to a dev/prod Power Platform environment for a Power App + it's associated Power Automate flows, but are finding flow changes made in dev are not being updated in the production environment.

Our setup is: The dev environment is a sandbox, while the prod was made as a production environment. Both have the dataverse accessible.

Inside the dev environment, we created a solution and imported the Power App and flows (they were originally made in the companies default Power Platform environment). Additionally we made a number of environment variables in the solution and updated the app/flows to use these.

Publishing process: To move from dev to prod, we're not using any source control/developer pipelines (yet), simply selecting the solution, hitting "Export", publishing changes, then choosing to export a Managed solution. Then in the production environment, we "Import" and when prompted choose to Upgrade (although we've also tried Update) and choose to enable plugin steps and flows included in the solution.

Problem: Changes made to the flows in the dev environment don't seem to be published into production. Example is this step in one of the flows where we switch to using an environment variable: 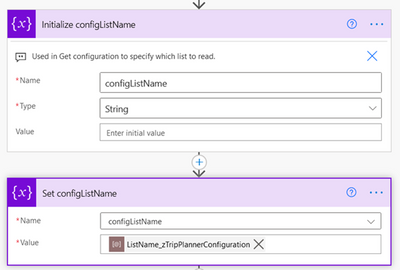 but after publishing/importing into production, when we look at the flow it still has the old settings

If we unzip the downloaded managed zip file, and inspect the json file associated with one of the flows we can see the change is there - or at least step seems to be there (the "Set configListName" set variable step)

If I make a change to the power app in the dev environment, and publish/export and import into production this comes through OK. Can anyone help with why the flow changes are not being imported?