During this public health crisis, my organization has transitioned to working from home. I created a flow in Power Automate for our local office to utilize for submission of a work request that is usually submitted on a paper form when we are working in the office.

I did this with my belief that there was a 90-day trial for Power Automate, and in the hopes that we would be back in the office by the end of that trial period. (Although, it has been working really well and my hope was to be able to extend this trial.) The flow basically emails the content of work requests submitted by users in Microsoft Forms to supervisors for approval, and the administrative assistant for completion.

It has only been about two weeks since we started using it, and I was surprised to have just received an email that I have 7 days before the trial period for Power Automate expires. A few questions:

1. Was I just incorrect about the 90-day trial period? I could've sworn that was what I had read.

2. Will the current flow I am using be deleted/stop functioning at the end of the trial? Or will I just be unable to create new flows?

3. Is there any other way to have information from Forms emailed to someone other than the person who created that Form?

I'm really disappointed that this method that has really streamlined our requests may end. I think there is a chance of extending it in the future, but with only having it in use for a couple of weeks, I don't have enough data to make a case for increased efficiency, improved tracking, etc.

Also, from what I can gather, there are only standard connectors in the flow. No premium connectors, if that makes a difference. In asking our IT folks, part of the response that I received was that "We have had issues with the application failing some processes because we do not use Outlook online. You can logon to the application using your [work] email address but will not be able to use it's full functionality. At this time it will not be fully supported by the service desk."

This made me wonder if I will be able to continue to use at least this basic flow, regardless of trial/no trial?

Thank you! I've been reading up as much as I can, but it is clear as mud to me at this point. 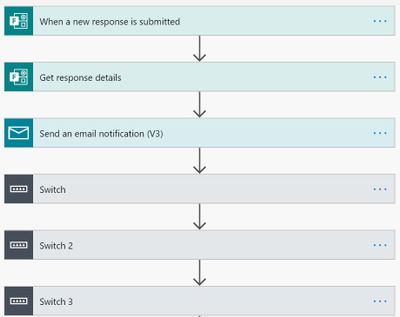 The trial plan is for 30 days and can be extended. If you have admin access, you can keep checking the licenses assigned and the trial period left for each user here: https://admin.flow.microsoft.com/tenant/userLicenses

After the trial period, you will not be able to create new flows and the previous ones will be disabled as well and deleted after a certain amount of time. You can reach out to support and explore options of extending the trial : https://us.flow.microsoft.com/en-us/support/

To send responses from a form as an automated action, I believe flow is the only way. You can probably setup rules on your outlook mailbox to forward the email received when a new response is submitted.

If you are using outlook office 365 it shouldn't be a problem for sure.

Did you know that you could restore a deleted flow? Check out this helpful article.