Flow is visible in SharePoint actionbar

At the moment I have 3 Flow-action buttons visible on my SharePoint actionbar. 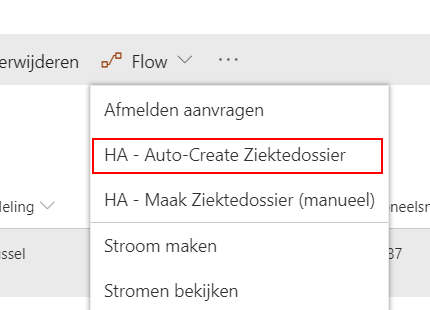 The last button uses the "For a selected item" trigger of the SP-connector (which is ok). But the second button uses a HTTP-trigger.

It also triggers the flow (but doesn't provide the needed info (empty json-object).

But the question is: why is this showing up and how do I get rid of it?

How is the JSON Schema formatted in your flow? I guess that it is related to the SharePoint list.

To test this issue, I create a simple flow which is triggered by HTTP Request but it doesn’t appear on the SharePoint site.

Could you create another flow with a different HTTP trigger to test this issue?

Hi @v-yamao-msft: I've tried using the exact same JSON-schema in a new Flow with an HTTP-trigger, but this didn't show up in the list.
I've tried enabling, and disabling the flow (waiting a couple of seconds between them) but the flow didn't show up.

I tried the same with the auto-create flow, which disappeared... and then re-appeared when I re-enabled the flow.

I'm pretty stumped why this particular flow is attaching itself to the list...

Especially since it doesn't appear to work at all (regular HTTP-requests work fine, but selecting an SP-item triggers it with gibberish-data).

Does anyone have any more insights?

Kudo Kingpin
In response to Anonymous
Yes, I have and I think I know why it's happening. In my case I have following configuration: - SharePoint Flow "On selected item" - It should appear in the actionbar. Result: it shows (OK!) - HTTP request flow - It shouldn't appear in actionbar since it's not triggered by SPO. Result: it shows (not OK!) The second flow however has some actions calling to that particular SharePoint library. If I deleted those actions OR in action Library Name field I've put id from variable (action shows "Cannot evaluate the parameter 'table' at design-time; it is empty or has a runtime expression." but flow can be still saved and be used without error if id is correct) the flow disappeared from SharePoint actionbar dropdown. It's definitely reproducable behaviour. Please fix it since it's really confusing for our client
Message 5 of 5
211 Views
0 Kudos
Reply