I have a flow that sends an email via Gmail, however the subject is blank when I look in the sent items folder in Gmail.

In the flow, all seems OK: 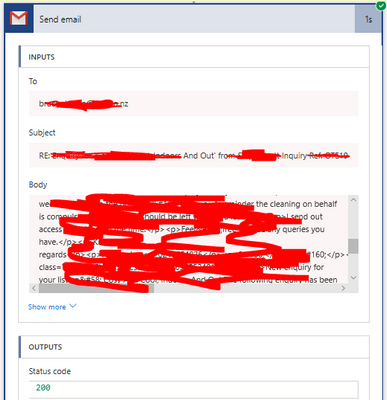 However, in Gmail, the subject is missing:

Furthermore, I BCC myself into this message and I never get it.

If the recipient is also in Gmail, it works fine. I appreaciate this is probably more of a Gmail problem than Flow, but if there are any others with this issue or known workarounds I'd like to know.

Can anyone help with this?

I just did a quick test w/ the connector and my own Gmail/GSuite account and it appears to work.

Now, I just did this as a basic test w/ plain text for subject and body.  I tested sending to my own Gmail account (which you stated worked for you as well), then I sent one to an old hotmail account.  Both worked fine.

I might do a quick test w/ your own code and sending it to some other recipient first (e.g. ...@outlook.com, ...@hotmail.com, etc.) just to be 100% certain it isn't the mail server receiving, then I'd look at the text you are putting into your subject and ensure there aren't any special characters that might be causing something to misfire.

Email from my Gsuite -> HotmailYou can see my subject (blah blah blah) arrives.

EDIT: I did notice that you said it didn't show a subject in your SENT folder on GMail.  I do see it appearing there as well.  However, I am using a GSuite account so it is possible if you are using a personal acct there might be some difference there as well.

@jhallI did a bit of testing (pulling hair) with this and found my subject is only missing when the Flow is triggered from a PowerApps button.

Some context - I have two Flows, one is triggered when a new email is received in Gmail. If it's not a reply, it parses the email body for some data and puts it all in an SP list, including the HTML body of the whole email itself into a multi-line string column with rich text enabled. That same Flow sends an auto response to an email address is grabs out the message body, using the Gmail Send an Email function with the sbject line being RE: {original subject} MYREF:{SP list ID} where SP list ID is the new ID of the record in the list. This works flawlessly no mater who the recipient is.

Then I have another Flow that's triggered by a PowerApps button - these flows don't appear under My Flows in the same place as the others, they're only accessible via web.powerapps.com for some reason. Maybe they're a bit different. Anyway, the idea is the operator can write an email response into a rich text TextInput box PowerApps and hit send, which does a patch on the rich text column in SharePoint then activates the Flow.

The Flow then sends an email to the person with the contents of the rich text column as the body, and the subject being the same as the auto-response earlier.

The first flow has a condition for subject contains MYREF: and treats it differently. If true, it updates the existing record with the body of the email.

Obvioulsy if the subject of the email sent by the PowerApps triggerd Flow is blank, any response to that won't trigger the first Flow and the database never gets updated with their reply, which is not ideal.

If you're still hanging in there - it's only ever the PowerApps triggered Flow that sends the email missing the subject, and only if the recipient is not in Gmail/Google Apps.

Anyway, this seems to me a bug that I'm unlikely to get fixed in here so I just created an outlook.com email account and used that instead. The Gmail account now auto forwards to the Outlook account and the replies go from there using the Outlook.com Send an Email action, with no problem at all!

So my problem is solved, but not really solved. Thanks for putting the time into testing and replying to this thread..

Heh. No worries.  I understand sometimes how it helps just to have another brain validating things.  Glad you found a workaround.