Id like to run a flow every 5 minutes to see if there is a problem with a service, and send an email if something is wrong.

But i dont want to send an email every 5 minutes, rather every hour, say. (to avoid dumping stuff into my inbox)

Within a flow, is there a way to check if previous runs of that flow sent an email, or took a particular logic branch?

The short answer is no - information from previous runs is not available.  A work around might be to log the info to a SharePoint list and refer to it when necessary.  You could retrieve the most recent entry.

Please note that Flows can run for a maximum of 30 days.

@ashim you could create a flow that runs predefined for a whole hour and only sends the notification at the end of the hour (or even predefine the flow for the whole day).

for the hour approach:

- create a variable S_Status (string) and set it to utcnow() ... variable - initialize

- Add a do until loop and check if i_counter is 0

- put inside the loop

> append the result of the check (ok or issue) to S_status, followed by a comma .... variable - append to a string

For the whole day you would need a second counter I_day that counts down from 24, a second do until loop and add after the condition 2 actions

- and the second resets S_status to blank ... variable - set variable

(*j you need to use intermediate step and assign current value of I_counter to a temp value. I use data operation - compose for that purpose 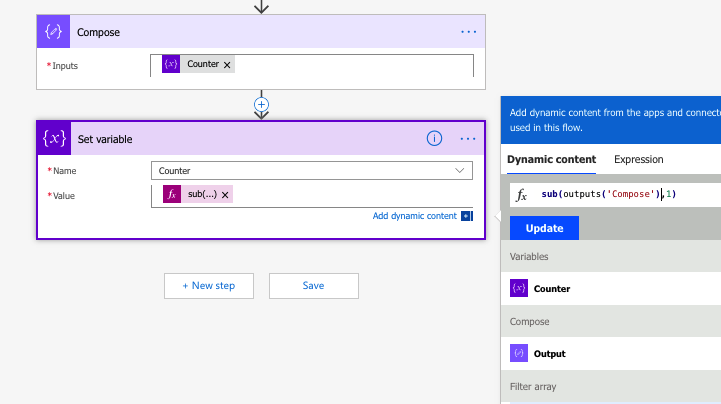 The function to check if previous runs of that flow sent an email, or took a particular logic branch is not supported in microsoft flow currently.

I afraid that there is no way to achieve your needs in Microsoft Flow currently.