I have a flow that sends an email on creation of a new sharepoint list item.

So if the value of "Adres" is:

It wil be displayed in the e-mail as

How can i change this?

You could set up Send an email-IS HTML.

If you do not select any options or select No, the message content will be displayed like this:

If this solves your problem, please mark your post as Solved.

You could set up Send an email-IS HTML.

If you do not select any options or select No, the message content will be displayed like this:

What if I need to use html format?

Is there anyway to do this with HTML mail?

Advocate II
In response to victorwc

I recently needed an HTML email that included multi line text from both both sharepoint and a text box within powerapps. I was able to find a solution.

So leaving it as HTML, not plain text, then just converting the new lines to html breaks.

@josephspengler - Can you elaborate on how/where you are adding this? I'm not seeing substitute as an option in an expression, whether using a Compose step or right within the Send an Email body.

@vwyankee this is what you want:

Helper V
In response to Paulie78

I found I didn't need the space and forward slash and up with this which worked exactly as I needed:

For others that may have similar struggles the above worked only after I manually went into my test SP list item and set line breaks but didn't work for the items I needed to that were written from a Power App. Digging into the Flow outputs I discovered why. In Power Apps I'm using char(13) for line breaks which translate to %0D, not %0A - result when created using char(10) in Power Apps - in the string value. After updating the formula above to %0D it worked on the data that I needed it to.

I also understand now that @josephspengler is using the substitute operator in Power Apps not in Power Automate. I also had to utilize that for the same reason for a couple emails that are sent from Power Apps.

I don't recall exactly why I'm using char(13) vs char(10) but I want to say it was because I wasn't getting the line breaks to show in Power Apps using char(10). Now to educate myself on what the difference between the two are...

I didn't find on the Advance mode the option for Sending an email-IS HTML.

My PDP comment value below is sending as a single line

Can you please advise how to get to this option 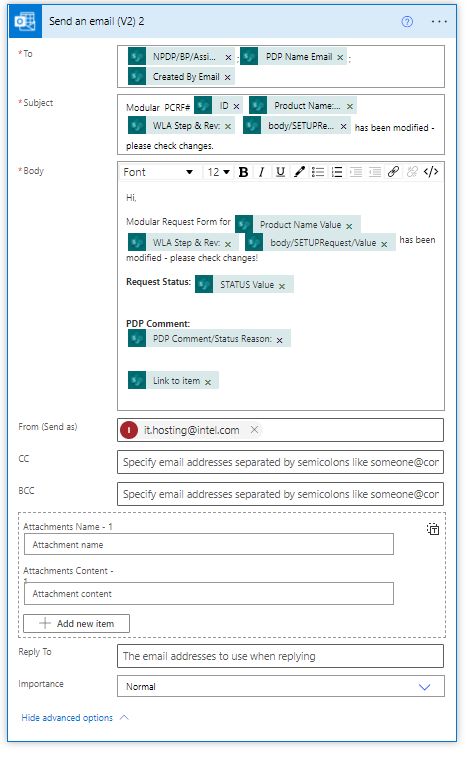 Helper V
In response to amoshe2

It's the icon all the way on the right of your toolbar:

Helper I
In response to vwyankee

what I need to do? Do I need to create function or any other expression to enable it? 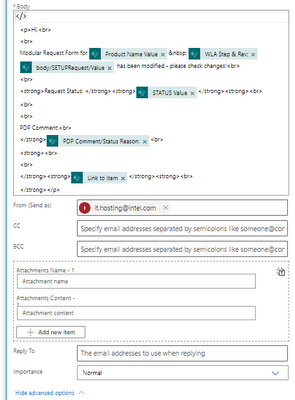 Helper V
In response to amoshe2

See this previous post. I am using this in a number of flows. Best to create it as a compose step and then just put the compose dynamic content in the email.

*Edit* - If you do it this way it doesn't matter if you put the email step in HTML or not.