I am trying to create a list item through MS flow event and i'm receiving below error. any idea ? Its sharepoint online.

It looks like your SharePoint list exceeded the 12 lookups limit. Make sure the view you are querying doesn't have more than 12 lookups in it. 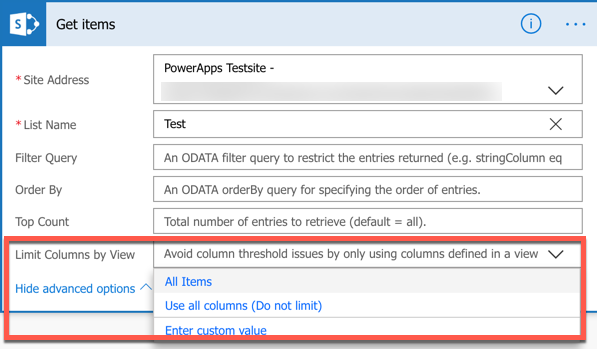 Akumar - I ran into this issue just last week. Let me explain:

We discovered this issue not while using Flow, but while using PowerApps, but it's the same issue. Flow, PowerApps, etc. - basically all of MS's PowerSuite Apps can only "talk to" SP Lists with 12 or fewer "Look-up" column Types.

If you're like me, at first was like wtfmate I only have a couple, like 5, but the reality is different... Here is a quote I found online: "Standard lookup columns, single-value managed metadata, multiple-value managed metadata, single-value people and group columns, and multiple-value people and group columns , Workflow Status , Created by , Modified by ( people ) are obviously counted as lookup columns .

So, literally, OOtB a SharePoint list already uses up 2 of the possible 12 look-up columns allocated to you because of the "Created By" and "Modified By" columns - which you cannot delete.

You will need to remove all people-picker columns, managed metadata columns, etc. until you are down to 12 or less for Flow/PowerApps to be able to talk to your SP List.

Here is the article I think I got that quote from: https://powerusers.microsoft.com/t5/General-Discussion/SharePoint-too-many-lookup-columns-cause-quer...