Sharepoint when created or modified with match function and condition

I've been trying to get this Flow to work correctly for a couple of days and now I'm reaching out to the community for help.

What is happening now is Flow is seemingly duplicating all the number of rows that is on the parent list when an item is added to the child. (i.e., parent has 5 items, and child has one, then when adding one row to the child list the parent would then have 10 rows all with duplicative values).   I've searched and followed https://powerusers.microsoft.com/t5/Building-Flows/SharePoint-List-Item-Created-Or-Modified-with-con... but when I'm inputting the condition formula ( @equals(length(body('Get_items')?['value']), 0) ) I get an error, and I'm not sure if the title eg' is even working.

Any help would be greatly appreciated. 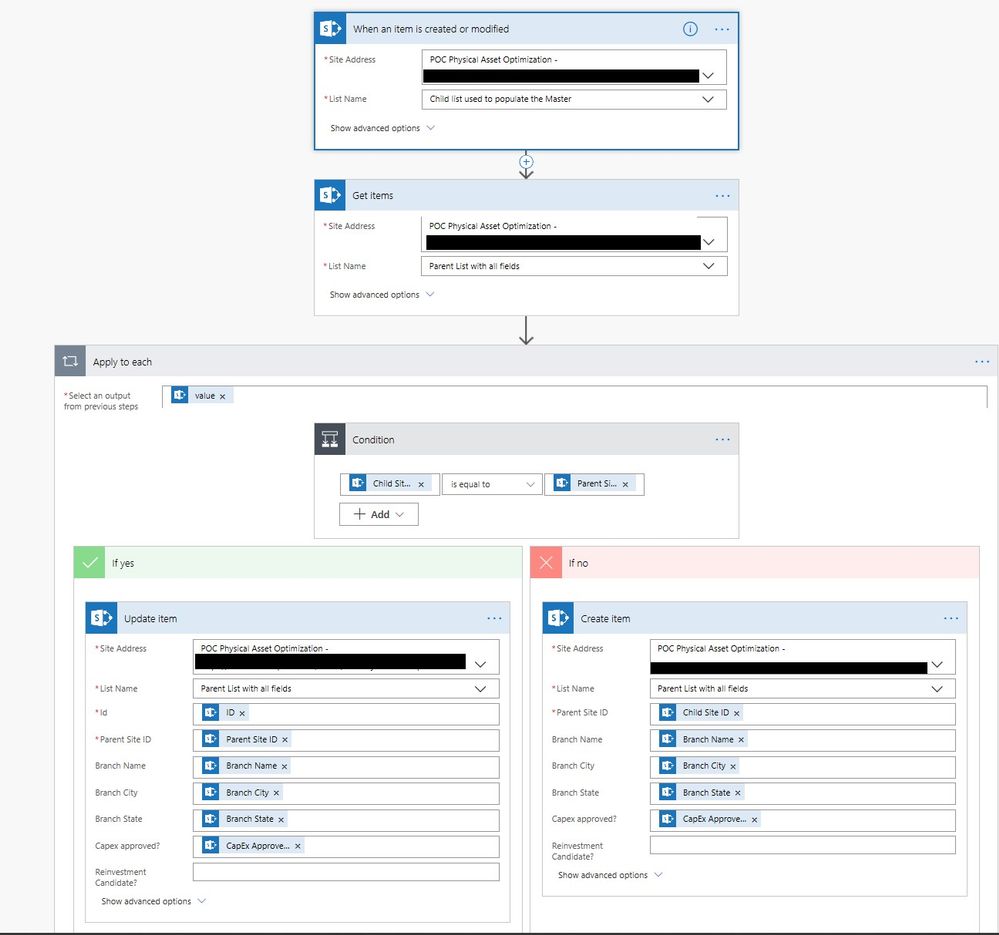 it says the flow was a success, but it looks like it stops at the Apply to each section of the condition card.

Resident Rockstar
In response to Skiroy

You have no items being returned by Get Items which means your Query is wrong.

Your logic should be as follows.

ListB - has additional column i.e. ListAID which is populated by ID from ListA.

Get Items from ListB where ID eq 'ID'

The 'ID' in the brackets is the dynamic content of the ListA ID column.

Your condition will be pointless as you will only get the 1 item back and therefore the no branch will never get hit.

Instead add a compose that checks if you get values back i.e. @{length(body('Get_items')?['value'])}

Then do a condition on the outputs i.e. outputs greater than 0. Yes = Update and No = Create

Helper II
In response to Gristy

Thanks for the input. I implemented your fix, but we still have an issue that I was hoping we could work through.

With that said, List A is not the sole source for populating List B (I think there's about 7 lists that update the Parent list - or List B). When I implemented your fix, It appropriately captured when creating new (Outputs > 0 = false = create item), but when an item on list A was edited it would still create another line item / row in List B (instead of updating the record that was already there, it would create a new line item with the modified fields) - which is not ideal.

So that comes with a couple of questions / clarification that might help.

1. Child Site ID and Parent Site ID fields contain a unique 5-digit identifier for that particular asset, and are not reused

- The helper ID column that is populated from ListA might not work due to each feeder list having it's own ID that another list doesn't have (7 lists feeding 1) / or if there is an instance of updating a record that is already in ListB and a ListAID hasn't been created - it wouldn't be able to find that ID to edit the correct row.

2. Child Site ID and Parent Site ID are actually the 'Title' fields in their respective lists, but have the names changed (even if that doesn't actually change the name of the column).

Looking forward to any thoughts,

Resident Rockstar
In response to Skiroy

The concept works the same, i guess you cannot use ID by its self if you have 7 lists feeding in, you will need to store the listname and the ID or some unique combination depending on the list like LISTA103, LISTA104, LISTE102, LISTE103. you can play around with REST querys in the browser to make sure the correct results are returned.